You may have already heard about the Change.org petition 14-year-old Julia Bluhm started. She asked Seventeen Magazine to commit to “printing one unaltered — real — photo spread per month” because of how such doctored images can affect young girls. Well today, Bluhm and Change.org held a mock photo shoot in New York in a protest to encourage the magazine, and others, to get on board. Our sister site, The Jane Dough, was at the scene and got a chance to speak with Bluhm about her endeavor.

Bluhm’s petition, now with over 44,000 signatures, had to do with the negative affects photoshopped models can have on young women, among them eating disorders, dieting, depression, and low self esteem.

To girls today, the word “pretty” means skinny and blemish-free. Why is that, when so few girls actually fit into such a narrow category? It’s because the media tells us that “pretty” girls are impossibly thin with perfect skin.

Here’s what lots of girls don’t know. Those “pretty women” that we see in magazines are fake. They’re often photoshopped, air-brushed, edited to look thinner, and to appear like they have perfect skin. A girl you see in a magazine probably looks a lot different in real life.  As part of SPARK Movement, a girl-fueled, national activist movement, I’ve been fighting to stop magazines, toy companies, and other big businesses from creating products, photo spreads and ads that hurt girls’ and break our self-esteem.  With SPARK, I’ve learned that we have the power to fight back.

The high school freshman is a fan of the magazine, and thinks they do a lot to help girls with body image issues, but than she knows they can do more. 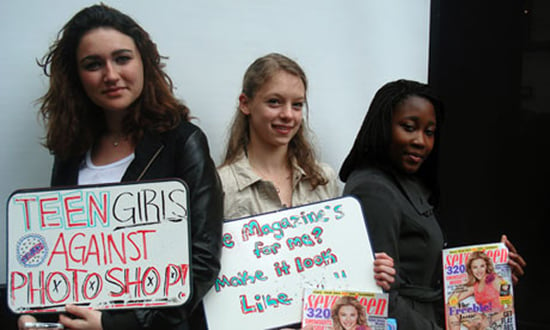 “I know how much of an effect these photoshopped images in the media can have on girls,” Bluhm told The Jane Dough outside Seventeen offices today. “Girls see these pictures and think they have to look like this (pointing at cover of Seventeen) to be considered beautiful when in real life these photos are often photoshopped, so it’s kind of impossible to look like that in real life. It can lead to low self-esteem [and] depression.”

She also told The Jane Dough she knows exactly how it feels to think you’re not good enough, “I want girls to be able to feel good about themselves, and being able to relate to the images in the magazines we read will help.”

You can put your own name on the petition here.

(via The Jane Dough)