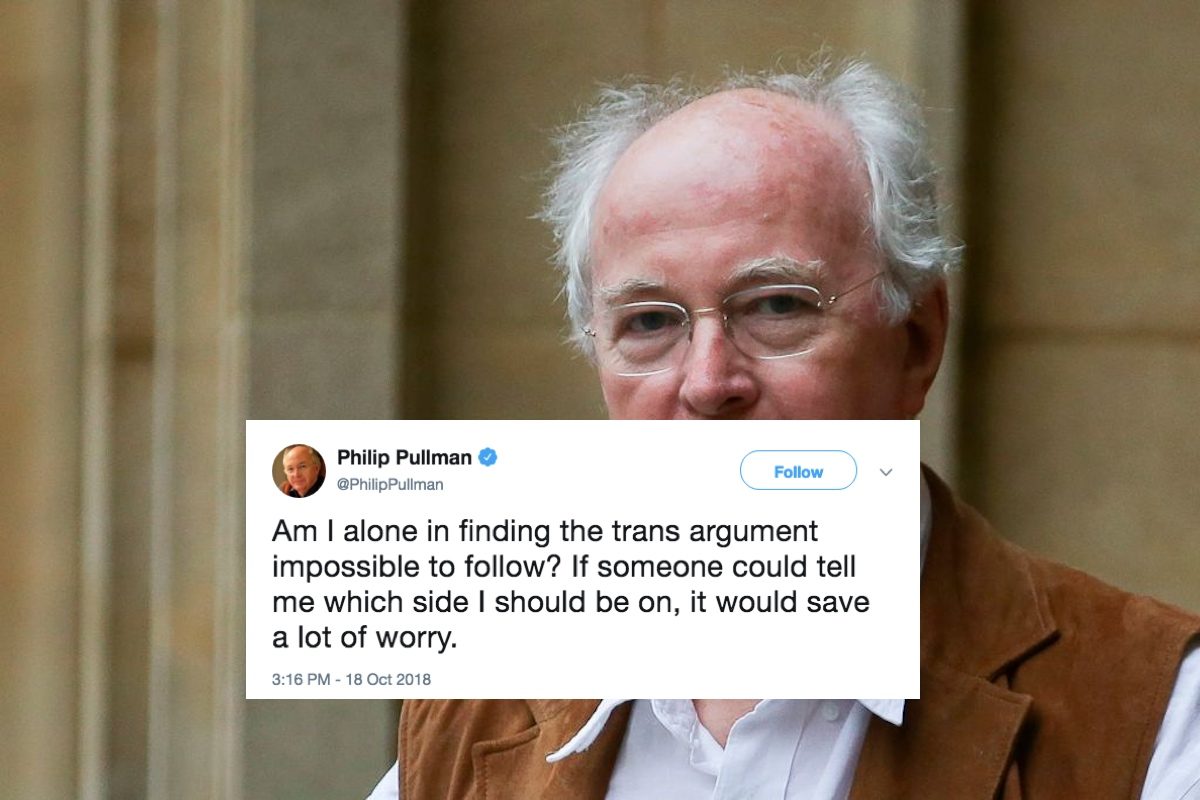 Author Philip Pullman, he of the best-selling His Dark Materials, a man once voted the 11th most influential person in British culture, took to Twitter to express his confusion about “the trans argument.”

Pullman—an Oxford-educated writer hailed as a humanist and praised as a literary luminary—actually typed out the following sentence in regards to trans people: “If someone could tell me which side I should be on, it would save a lot of worry.”

Am I alone in finding the trans argument impossible to follow? If someone could tell me which side I should be on, it would save a lot of worry.

There is so much that is desperately wrong about Pullman’s Tweet that it’s difficult to know where to start. For context, I believe that Pullman thinks he is confused about the discourse from transphobic social conservatives masquerading as pearl-clutchers, and TERFs, or “Trans-exclusionary radical feminists,” if you have been so lucky as to never encounter them until now.

This tiny, hateful subset of feminists, usually described in Internet parlance by rational people as “the worst,” do not believe that trans women are women (or that trans men are men), and seek to refuse them access to the spaces of their gender identity and basic human rights. TERFs thrive on transphobia and transmisogyny, and their hypocrisy is mind-boggling.

Trans people aren’t an argument or a debate or hot controversial topic to choose sides on. We’re just people. We just want to live our lives as people.

The bigotry spewed by TERFs is often seized upon by politicians and policymakers equally keen to deny trans people the ability to live their lives. (These are the sort who continue to meddle with the rights of personhood based on gender, ethnicity, religion, and sexual orientation—strange bedfellows for so-called feminists.)

As Julia Serano wrote in a recent piece on Medium, “social conservatives and other groups who are opposed to transgender rights and gender-affirming healthcare have increasingly taken to amplifying TERF voices,” for the simple reason that “It is far more socially palatable to frame their anti-trans policies and positions as being ‘pro-woman’ rather than ‘anti-transgender.'”

This is, perhaps, the sort of thing that Philip Pullman might have read up on before tweeting.

you’d not ask today what side of the black suffrage or women’s rights ‘arguments’ you should be on, i’d hope. there were plenty of questions and concerns raised for those, though. plenty of faux calls for civility, too

The irony of TERFs furiously working against other women, to the benefit of the kind of people who would have once merrily imprisoned suffragettes, is not lost on the rest of the world that understands that trans women are women. Hence TERFs being just the absolute worst. They use the same divisive tactics that bigots always have.

Some people who don’t like us because they don’t believe us when we say we are trans would prefer that we be removed from public life, and attempt to influence policy with scaremongering tactics similar to those used against gay people and people of different ethnic backgrounds.

I’m so used to ignoring TERF and other transphobic rhetoric that it’s astonishing to witness a beloved, high-profile author pandering to the concept that there is some sort of “argument” worth debating. But if Pullman is indeed talking about TERF and anti-transgender ideology here, he doesn’t make that clear—I’ve made that assumption from the conversations in his Twitter thread.

No, his Tweet pleading for someone, anyone to just tell him what side to be on only qualifies “the trans argument,” thus suggesting to his more than 100,000 followers that “trans” is something that can be argued about and sided for or against.

He then doubles down on the idea that there needs to be some sort of “debate” held.

I’m all for that.

There is nothing to debate.

A lot of trans people are rightly angry and horrified because we keep treating their existence as some ‘debate’. Just treat them with respect and stop giving platforms to those trying to spread hate.

Not only is this stance from Pullman incredibly disappointing, it’s also head-scratching and seems out of character. Pullman is a highly educated man whose best-known series, His Dark Materials, is primarily concerned with oppression and the abuses of unjust authority.

As a public figure, Pullman has for decades made pushbacks against censorship and taken vocal positions in favor of civil liberties. “Pullman has a strong commitment to traditional British civil liberties and is noted for his criticism of growing state authority and government encroachment into everyday life,” reads his Wikipedia page [emphasis mine].

How can a man who champions such a philosophy possibly wonder what “side” he should be on when it comes to the rights of trans people to, say, use the bathroom that corresponds to the gender they identify with, rather than have that be dictated to them by the government?

So, I don’t really feel like I have a side. I just feel like a person who wants to do very normal things, and wants very normal rights, safety and existences for my friends.

When my personhood is up for debate, I’ve already lost.

There is a total dissonance between Pullman’s longheld views and his ignorance when it comes to trans issues. And it’s all the more dispiriting that he—a famous multi-millionaire with every resource at his disposal—is apparently uninterested in doing his own legwork or research on the matter.

Pullman conceivably has access to any library or academic institution in the world, most of which would trip in their haste to assist him. He could lift a finger and summon experts and scholars in trans issues and gender studies. He could read an article or a book.

Instead, he’s blundering about in the biggest public square we have, Twitter, claiming that this matter is “impossible to follow,” and asking that others tell him how he should think and feel. I couldn’t have lost more respect for him if I’d encountered him stumbling into walls in an actual public square.

(As a reminder of Pullman’s ongoing cultural impact and his resources, The Golden Compass is being adapted once more, this time as a big-budget TV series by the BBC and HBO, co-starring Lin-Manuel Miranda.)

Pullman’s Tweets feel like a betrayal to countless readers who have enjoyed and identified with his work for decades. Even after he received hundreds of thoughtful responses from trans people trying to explain what’s happening to him—as he requested!—his follow-up Tweet wasn’t a mea culpa or a suggestion that he will, in the future, try to speak with others outside of his sphere of knowledge or do more research to better understand.

No, Pullman went full “both sides,” though he’s “impressed” with people who are “advocating kindness.” Like he should have done in the first place?

It’s like a lot of angry people in a dark room swinging heavy sticks around with all their might. So far I’m most impressed by the voices advocating kindness.

He’s still framing this as some sort of debate amongst “angry” people, not some people advocating for the right to exist and others trying to deny them that. He’s “impressed” by the voices saying we should be kind to everyone? Is there some sort of scorecard he’s keeping, and when he’s “impressed” enough he’ll figure out how to come down on the matter of whether trans people deserve rights or not?

This is heartbreaking, it is infuriating, and it shows the kind of willful ignorance I would not have ascribed to the author of His Dark Materials. Let’s use his own work to break this down further, shall we? 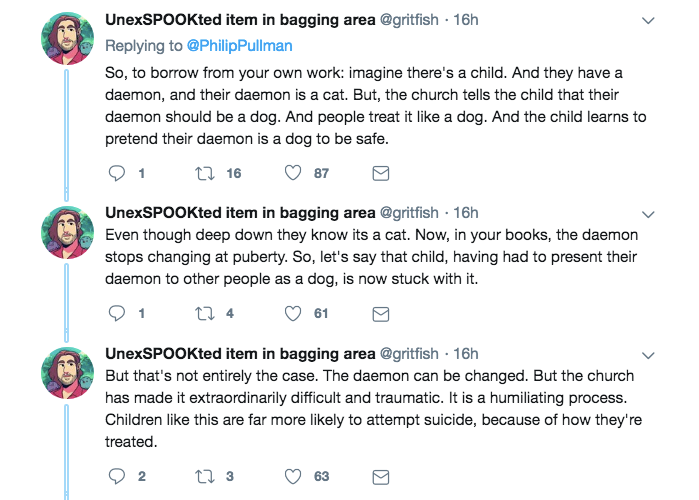 Listen to the trans people replying to you. Ask them questions if you don’t understand. At the very least follow the advice of stonewall on this, because they’ve done the research.https://t.co/zuPfHXSznT

Try this one: do I get to keep my daemon, or do you believe the TERFs who say I don’t deserve one and should be separated from my daemon? I mean, *you already know the answer, it’s in your books.* JFC. https://t.co/hCAYmzclu8

It’s trans voices that should be amplified and listened to here, so I recommend reading the responses to Pullman’s Tweet, which, contrary to his own characterization, are not at all a lot of angry combatants swinging sticks in a dark room. The overwhelming majority are calm and heartfelt replies from trans people, giving Pullman a lot more of their time than he has devoted to navel-gazing the matter of their existence.

Daniel Ortberg’s Tweet was the only bit of levity I saw—a welcome respite from the sadness and frustration this incident espoused.

I’ll end here with a story that everyone should read. I hope, fervently, that Philip Pullman reads it too. 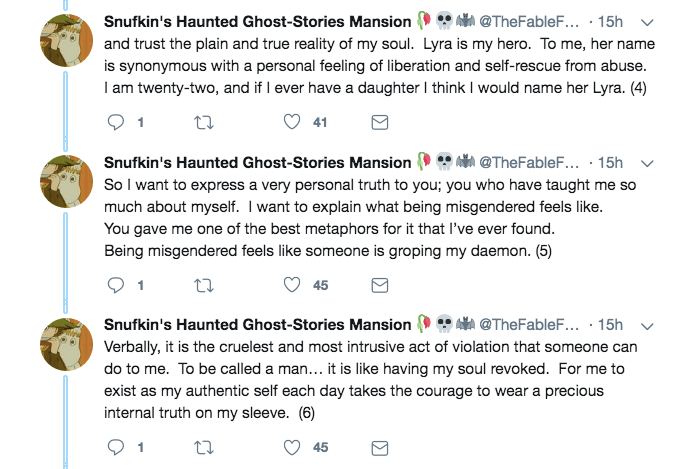 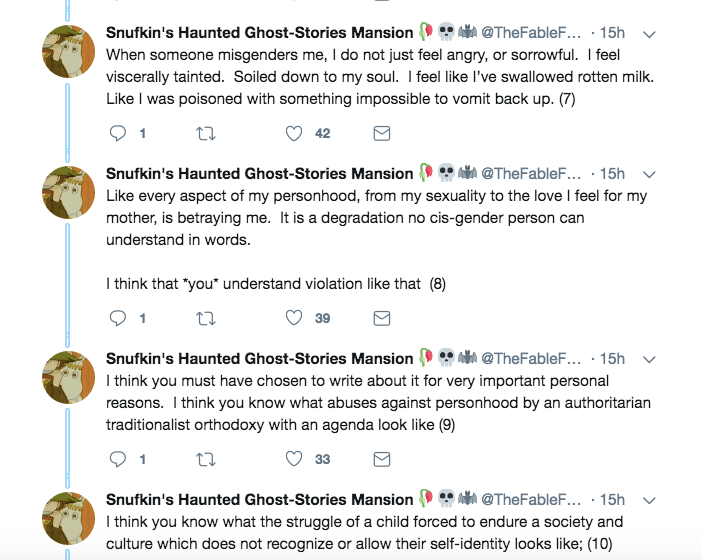 I think those truths live front and center in your greatest literary work.