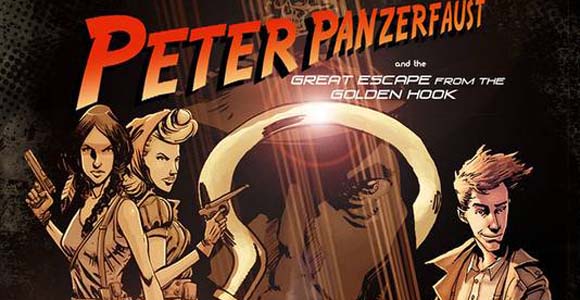 How do you get someone to watch your motion comic? Cast Elijah Wood, Summer Glau, and Ron Perlman. They’ll be voicing characters in Image Comic’s Peter Panzerfaust, a World War II-set Peter Pan tale. And oh yeah, it’s bringing Hook’s Rufio, Dante Basco, back to Neverland as well.

I’ll be honest. I’m pretty biased when it comes to motion comics. I think they’re terrible. That being said, Image has my attention.

We know these actors from their resumes filled with genre roles but they aren’t stranger to comics in particular. Wood played Kevin in Sin City, Glau voiced Supergirl in DC’s animated Superman/Batman: Apocalypse, and Perlman is Hellboy, of course. Basco, also known for playing Prince Zuko in Avatar: The Last Airbender, is well-remembered by kids of the 90s as Rufio, the punk Lost Boy from Hook., and that’s appropriate considering the topic at hand.

Peter Panzerfaust, written by Kurtis J. Wiebe and illustrated by Tyler Jenkins, re-imagines J.M. Barrie’s classic tale with Peter, the boys, Wendy, and Tiger Lily as members of the French Resistance in WWII. According to the press release, “Wood and Glau voice the indomitable characters of Peter and Wendy, while Perlman brings to life Peter’s arch-nemesis, the Nazi officer Kapitan Haken, the series’ incarnation of Captain Hook.  Basco, who played Rufio in the 1991 movie Hook, will return to the Neverland universe as the voice of Alain.”

Adjacent Productions (a part of BBC Worldwide Productions) and Quality Transmedia are behind the motion comic project and the whole thing is being executive produced by Adjacent’s Senior Vice President of Scripted, Julie Gardner (Doctor Who, Torchwood), Dan Tischler, and Jeff Krelitz. The press release also says they are developing a live-action series based on the comic, though the big name stars aren’t attached for that.

What’s your opinion of motion comics? Will you give this one a try?