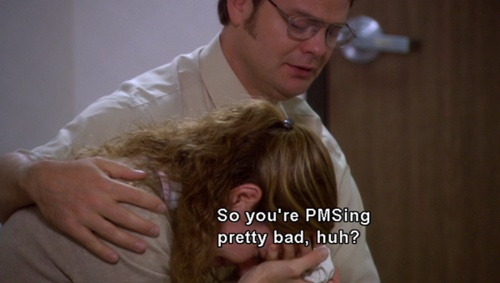 Bristol-based “community interest” company Coexist has become the first-ever UK business to provide paid time off for employees on their periods. Coexist intends to work with, rather than against, staff cycles by allowing people to head home when The Crimson King comes calling–but naturally, not everyone is happy about that.

Bex Baxter, a director at Coexist, told The Bristol Post

I have managed many female members of staff over the years and I have seen women at work who are bent over double because of the pain caused by their periods.

Despite this, they feel they cannot go home because they do not class themselves as unwell.

And this is unfair. At Coexist we are very understanding. If someone is in pain – no matter what kind – they are encouraged to go home.

[…] we wanted a policy in place which recognises and allows women to take time for their body’s natural cycle without putting this under the label of illness. There is a misconception that taking time off makes a business unproductive.

Actually it is about synchronising work with the natural cycles of the body.

Baxter didn’t specify whether the policy would also be open to male employees who have periods.

Although period leave might be new to the UK (it’s worth noting that the UK also still taxes necessary period products like tampons and sanitary pads), similar measures have been around for decades.

But as it stands now, many people who live in countries with period policies are unable to take advantage of them. Indonesia’s regulations require women to submit to a physical examination by their company before taking menstruation leave, and Korea Times writes that women, particularly women in male-dominated workplaces, often push through the pain instead of taking advantage of their allotted day off:

Female workers are entitled to take one day off for menstrual pains every month but few dare to exercise that right in male-dominant workplaces here. The reality they face is harsh. They need to muster tremendous courage to tell their male bosses they will use sick leave for period cramps […] female teachers are terribly reluctant to exercise their right, not because they don’t want to, but because they feel sorry for the extra burden their co-workers have to shoulder in their absence.

Li Sipan, a women’s rights advocate in Guangzhou, which is considering adopting Anhui’s period leave policy, told CNN that period leave regulations could even cost women in Guangzhou potential jobs: “Female employers might worry they wouldn’t be hired because of the extra time off. So I’d suggest the regulation not target a specific gender, but women with specific jobs.” She also notes that migrant workers, arguably the people who would benefit the most from period leave, since they often work in highly physical jobs like assembly lines and are required to stay at their post for long periods of time, would likely be unable to provide a doctor’s note.

At worst, national period policies can be unenforceable, invasive, and hurt women’s chances for employment. But it should be interesting to see how period leave functions on a much smaller level in the culture of a specific workplace like Coexist. Baxter told the Bristol Times that she believes the leave will ultimately make workers more productive:

Many companies are male-dominated and encourage long hours but there is a misconception that taking time off makes a business unproductive.

[…] This is not about employees taking more time off but working more flexibly and efficiently around their menstrual cycle and encouraging a work-life balance.

When women are having their periods they are in a winter state, when they need to regroup, keep warm and nourish their bodies. The spring section of the cycle, immediately after a period, is a time when women are actually three times as productive as usual.

The leave will not be mandatory, and Baxter isn’t concerned about employees taking advantage of the new policy: “We work on a triangle ethos of ‘trust, love and play’, so everyone at Coexist respects the company and gives more than 100 per cent to their work, so I don’t think we will have an issue with people deceiving us.” It’s also worth noting that Coexist’s company is female-dominated, so women who take the leave may face less judgment from their peers than they would if taking advantage of similar policies in a male-dominated workplace.

I appreciate that Coexist’s policy focuses on trusting women and doesn’t imply that people who menstruate are any less productive, valuable, or rational than their non-menstruating peers, but I suspect their decision will be controversial nonetheless (and not just because of the requisite backlash from whiny cis dudes).

Period pain can be as severe as the pain associated with a heart attack, and 1 in 5 period-havers experience that pain to some degree, but some people argue that instituting official leave policies will only stigmatize menstruation further. Slate’s Katy Waldman wrote in 2014 after The Atlantic published a hotly-debated piece on the subject,

[…] if women really want to demystify their bodies in their places of employment, maybe they should just drag those menstruating bodies to work and give their colleagues the play-by-play. (“Hold that thought. Gotta change my tampon.”) Mostly, these policies reinforce bizarre ideas about female anatomy and fertility—like the notion that ladies “who don’t rest during their menses will have difficulty in childbirth later,” or that “the fairer sex” can’t function while their uterine lining sheds.

This might be a little reductive, but as someone who does occasionally visit Crimson Peak and would not at all be offended if I worked for a company that allowed me to take time off during that time, I think the key to creating a progressive period policy lies in trusting people who menstruate. If someone says they need to take the day off to deal with period-related symptoms, they should be allowed to; without requiring a doctor’s note, and definitely without undergoing an examination by their company. And if someone is open and frank about the status of their uterine lining, but would rather work throughout their period, they should be able to do that without people treating them like invalids or questioning their judgment.

Of course, period leave policies become more complicated depending on an office’s gender ratio–even if women are encouraged by official company policy to take time off during shark week, period-havers can still become ostracized for taking that leave if they work in a male-dominated space. The same goes, of course, for people giving their colleagues the period “play-by-play”–that’s an awesome, de-stigmatizing idea in theory, but even if you can’t lose your job for talking openly about the crime scene in your pants, you could still face serious backlash from coworkers.

I’m curious: do any of you have period leave policies at your job? Would you take advantage of one if you did? What do you think of Coexist’s policy?