Pennywise and The Babadook Sitting In a Tree, K-I-S-S-I-N-G. And It’s “Babawise,” I Don’t Care What Anyone Says

The Internet couldn't be happier. 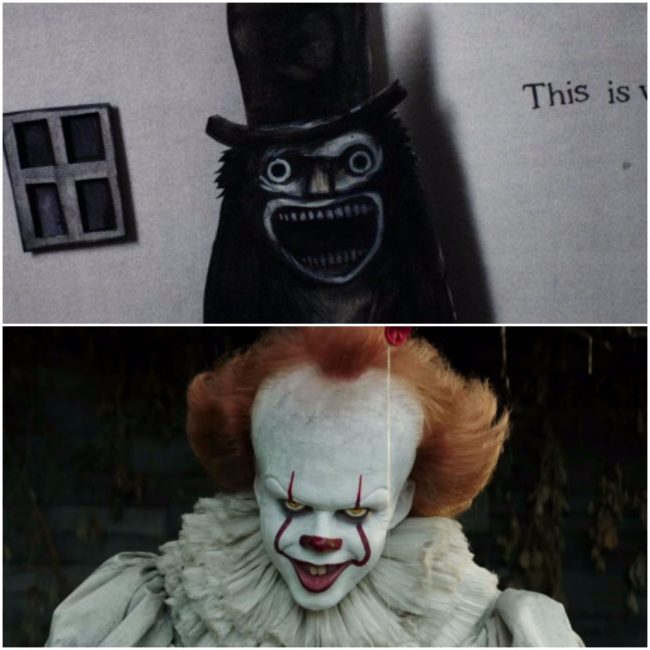 First, this year’s Pride celebrations revealed to us that The Babadook is actually an LGBTQIA icon. Cut to: people being weirdly attracted to Pennywise, the child-abducting monster from Stephen King’s It. Now, the worlds of these two horror stories are coming together in a beautiful way. The Babadook and Pennywise are currently Hollywood’s newest “it” gay couple. (Get it?)

And really, could we have expected anything less from these two horror film power players? Of course they were going to find each other and double the creep factor in the most adorable way possible. Well, the Internet has wasted no time in celebrating their love. You’ve already seen this adorableness by the artist Kumi on Twitter, as shared in Kaila’s article yesterday:

Pennywise and his boyfriend, The Babadook are off on a date to get crepes and terrorize some kids. pic.twitter.com/eakshrfkN7

But there has been an explosion of Babadook/Pennywise art to warm our cold, cold hearts with their love:

pennywise and babadook and their adorable little son tomas

OMG, Jessica (@my2k) on Twitter drew an amazing illustration including a cameo from Tomas of The Orphanage! 1) That’s exactly the kind of son they’d have, and 2) way to skillfully add to a meme!

And then, of course, there’s the hilarious commentary:

Me: *looks at straight couple*
Me: okay, but who is the babadook and who is the pennywise of the relationship

BREAKING: The Babadook just left Pennywise for the new Hellboy

But there was one tweet in particular that I found really interesting. Because, you see, when I first heard about The Babadook and Pennywise cozying up, my very first thought was “Babawise.” You know, their celebrity couple name. Well, little did I know that there was apparently a poll no one told me about so that I could take part:

The Babadook was out and proud long before Pennywise. Now, how come the female-created monster gotta take the backseat to the one created by a dude, huh? I cry chicanery! #SmashthePatriarchy! #Feminism!

To those of you who voted “Pennydook,” I want you to look deep in your souls and think about why it really is that Pennydook “just sounds better” to you and really examine your subconscious feelings about gender. You know, after you’re done shipping a horror-children’s-illustration and his horror-clown boyfriend.