In which Eva Green actually earns herself an Emmy nomination. 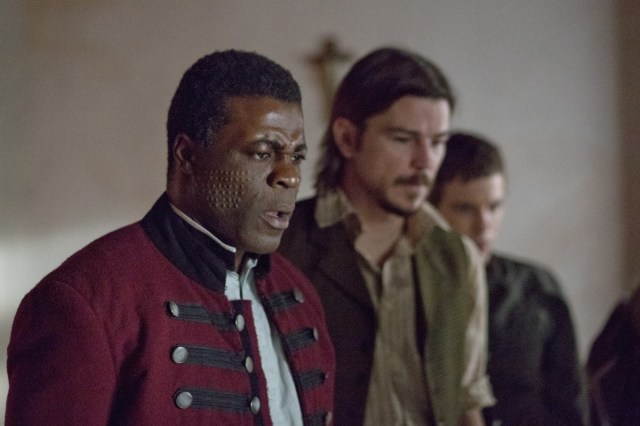 The penultimate episode of Penny Dreadful gave us pretty much everything we’ve come to love about this show – Eva Green’s acting, Gothic horror, Josh Hartnett’s bad-assery, and the devil. Oh, and a (thankfully) notable lack of Nice Guy Caliban. Let’s get to this review before the inevitably insane finale, shall we?

It’s probably safe to say that not a whole lot happens plot-wise in this episode, because seventy-five percent of the hour is taken up by Eva Green’s flawless performance as Vanessa, fighting demonic possession. I think Kat Dennings probably put it best:

Green’s creepily seamless transitions from Vanessa to Amunet, the demon attempting to possess her, served to amp the tension up in this episode; so much so that, for me, it was easily the most anxious hour of the season. Of course, despite the fact that Vanessa is fighting Amunet, she also doesn’t seem that appalled by the idea of destroying the world and overthrowing God by the devil’s side, so I’m thinking Vanessa might need to just have a quick think about her priorities.

We also have another crazy-good performance from Josh Harnett this week as Ethan – when he’s taken over by Amun-Ra (or the devil, or whatever), he gets real compelling on a level I don’t really want to contemplate. As someone who was never a big Harnett fan, I’m shocked by how much I like him in Penny Dreadful. I have no idea where Ethan’s sudden religious tendencies came from – does his secret American past have some church-y connections? Did Brona’s pendant take over? Had he done a bunch of research about exorcism just on the off-chance that it might come in handy? Will we even get answers to all of this next week? And in addition to his sudden conversion to priesthood, we also got some Ethan-forshadowing when Vanessa described to him the “animal” inside her, “scratching to get out” – almost like a werewolf, you might say.

Next week, Ethan. Next week.

“Possession” also gave us some excellent Sembene moments (petition to make season two entirely about Sembene, anyone?); the revelation of Victor’s morphine addiction (which is, I suppose, what happens when you give children medicine made out of cocaine); and Malcolm still being super, super shady. Nice Guy Caliban is mercifully absent from this episode, except when we see him staring balefully through the window at Victor a couple of times. I desperately wanted Victor to storm out into the street and be like, “Oh, are you sad and angry because you can’t put your p in a v? Well I am dealing with the actual devil in here, so sorry if I’m not prioritizing your sexy times needs at the current moment you total fedora-wearing Nice Guy.”

Maybe we’ll get that in next week’s finale, “The Grand Guignol.” There are a few other things we know we have to get next week as well: Brona getting Bride-of-Frankenstein’d; Malcolm’s Big Secret; Ethan going all wolfy; and even, perhaps, the revelation of the true nature of this Dracula character. Oh well; at least “Possession” gave us a little extra information about the Dorian/Ethan love scene that we were so cruelly denied.