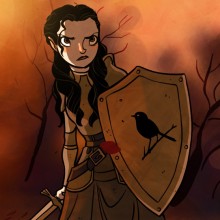 “Humans are always asking us if we ever get tired of doing “Penny Arcade,” which is a reasonable question, but from here inside the mechanism it doesn’t all hook up conceptually. It would be like asking if we get tired of eating “food.” The one thing you may rely upon when it comes to our work is that it will be

though it may also be gruesome or oblivious, or gruesome and oblivious, depending on the day. “Penny Arcade” doesn’t have a firm definition, it’s a container object that represents our generalized creative output. We make whatever we want to make, which (luckily for us) generally means .jpegs about videogames, but it can also be morality plays about imps and businesscats, samurai with paper tubes, technoir, or any other Goddamned thing. I don’t entirely know how it works, and I don’t entirely know why you stay, but this arrangement appears to work for both of us. And, as I have suggested on many other occasions, you can’t beat the price.”