Since when is penis-making not Play-Doh 101?

I dunno if anyone else follows Play-Doh on Facebook but you should cause they’re doing some serious damage control pic.twitter.com/TooleS5PgE

Play-doh had the hard job of doing some damage control on Facebook after what I can only assume was a cock-up in the design phase resulted in a plastic accessory looking less like the Cake Mountain icing maker it was supposed to be and more like, well, a dil-doh.

[Editor’s Note: We’ve got a pressing update to this story right here!]

And the people who say it looks like a penis aren’t exactly wrong, either:

I salute the designers who somehow managed to get this Play-Doh icing maker past their bosses. http://t.co/cRCnsEMmmo pic.twitter.com/0aQMtJS9Wi

Plenty of actual sex toys don’t look that much like penises.

But ruining Christmas? That’s probably a bit of a stretch. As with most cases of inappropriate innuendo for children, the ones who get it are already beyond being affected, and the ones who don’t will never notice. That hasn’t stopped Play-Doh from frantically deleting pictures like this one from their Facebook page:

Which has just resulted in more people showing Play-Doh the Play-D in response, so unnecessary censorship mission accomplished, everyone. Well done. 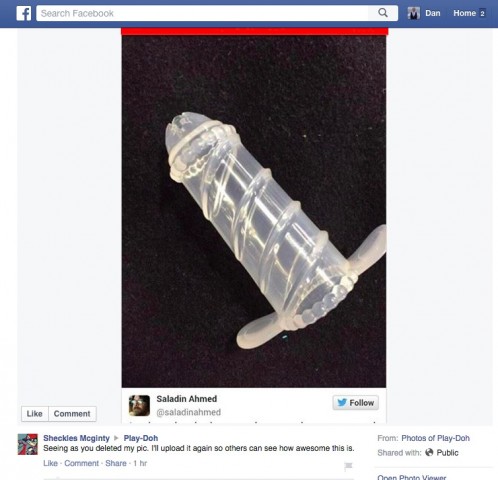 Man, Play-Doh’s head of social media is going to need a stiff drink when this all blows over.

(via UPROXX and Styleite)