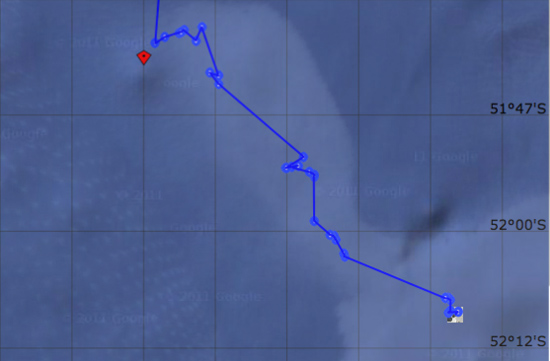 A few months ago, the Emperor Penguin that would come to be known as “Happy Feet” came ashore in New Zealand. After it was clear that the penguin was not faring well on his own, rescue workers nursed him back to health and released him with the hope that he would find his way back to Antarctica. Now, the whole world can follow this plucky bird’s progress from the comfort of their own homes through Google Maps.

The whole scheme works thanks to a small GPS tracking device attached to the penguin. Sirtrack, the device’s maker, is keen to point out that it has been specially designed not to impede the penguin’s swimming ability and weighs less than 1% of the bird’s weight. Twice a day, the device activates and broadcasts location data for three hours at a time, presumably to increase the onboard battery life.

So far, Happy Feet seems to be doing quite well on his southward journey, but we can only hope that he doesn’t get thrown off course again.