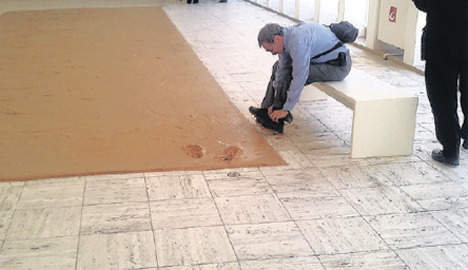 The man pictured above has just stepped in Wim T. Schippers’ Peanut Butter Platform, on display at the Rotterdam Boijmans van Beuningen museum. The work, which consists of 1,100 litres of delicious sandwich spread over a 14m x 4m expanse, probably sprang from Schippers’ belief that, “in principle everything is meaningless and absurd, but is therefore worth the effort nevertheless.”

That has not stopped three people from accidentally blundering into the work. The museum, for their part, has remained unmovable on the matter. Yes, they say that the patrons should have to pay for the damages they have caused the art. No, they won’t erect a guardrail around it. Why? Because of aesthetic concerns. According to the Google translation of this Dutch page, “Peanut butter is no floor to the fence because a fence is not beautiful found.”

While their position is understandable, and the work quite striking, it seems silly that the museum has refused to respond to how their space is being used and put up a guard rail. Furthermore, it is a bit harsh to charge patrons for damaging a precariously placed work of art that has to be re-made every time it goes on display anyway. Unless it’s all just a dastardly plot to fleece unsuspecting patrons. Hopefully, this will be the last of the embarrassed art-goers to fall victim to Schippers’ work. If you’re in Rotterdam, watch your step.

Read on after the break to see museum workers assembling the work, comprised over 2,000 normal jars of peanut butter.