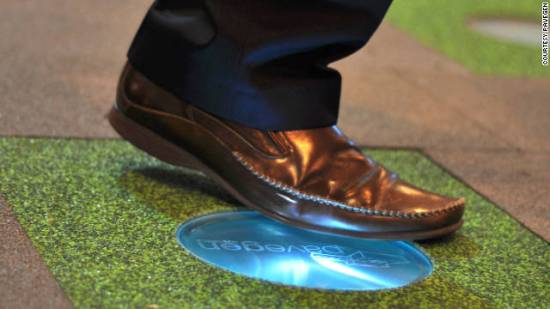 PaveGen slabs, a technology developed in part by Laurence Kemball-Cook, convert human traversal into electricity. While the tiles have been in testing for a while now, they are slated to make their first big commercial appearance between London’s Olympic stadium and the Westfield Stratford City mall during the 2012 Olympics. The twenty PaveGen tiles to be placed are expected to generate enough electricity to power at least half of the malls outdoor lighting needs, practically from nothing.

The exact way that PaveGen tiles create electricity from the pressure of a footstep is something that Kemball-Cook doesn’t like to talk about, but what we do know is that the slabs, made from recycled rubber, compress about five millimeters when stepped on. The electricity generated can then be sent out to a connected device or used to charge a battery that the tile can use to store electricity for up to three days. Also, for fun, a small fraction of the energy goes to lighting up an LED, so you can feel like you’re wearing cool kid sneakers from the 90s.

“We recently came back from a big outdoor festival where we got over 250,000 footsteps — that was enough to charge 10,000 mobile phones,” Kemball-Cook told CNN. Those numbers sound like they could be pretty promising when it comes to putting the tiles in high traffic areas. The thought is that they could eventually be used to power things like public lighting, light up street maps, and maybe even advertising.

Of course, whether or not this changes everything or just remains a neat gimmick all depends on how easily (and cheaply) PaveGen tiles can be made. The cost of each tile is something else that Kemball-Cook doesn’t feel particularly comfortable about, unfortunately. Whatever the case, this trial run at the Olympics should do a lot to prove the potential of the technology and get the name out, which is definitely a good thing. Maybe someday we’ll see light up sidewalks powering the lights around us as we go. It’s no flying car, but it’s still pretty futuristic.