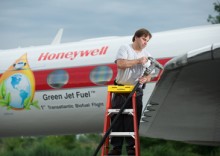 Over the weekend, bio-fules achieved an important milestone when two transatlantic flights landed at the Paris Airshow. These were the first ocean-crossing flights ever made using with green fuels. From the Scientific American:

The blended fuel boasts all the same characteristics as traditional jet fuel, except that it burns a little more frugally. The bio-jet has to be blended, however, lest it leak out of conventional engines (biofuel lacks the aromatic hydrocarbons that help swell shut valves and seals in an aircraft engine). On the upside, the blended mix cuts down on the pungent aroma of jet fuel for the ground crew.

One of the transatlantic hops was powered with a 50% blend of kerosene and camelina oil, made by the Honeywell corporation. The flight took Honeywell’s small Gulfstream jet over the ocean. Perhaps more significant was the other transatlantic flight, this one using only 15% bio-fuel blend but used to power the very, very large Boeing 747.

These flights are mostly for show, as bio-fuels are a fairly well established technology and the airplanes needed no special modifications to burn the fuel. But it is certainly significant, perhaps heralding the beginning of large-scale adoption for greener jet fuels. And it could be coming sooner than we think: According to Scienftific American, the only thing standing between wider adoption of Honeywell’s bio-fuels for jets is cost and certification for use in commercial flights.

(image and story via Scientifica American)