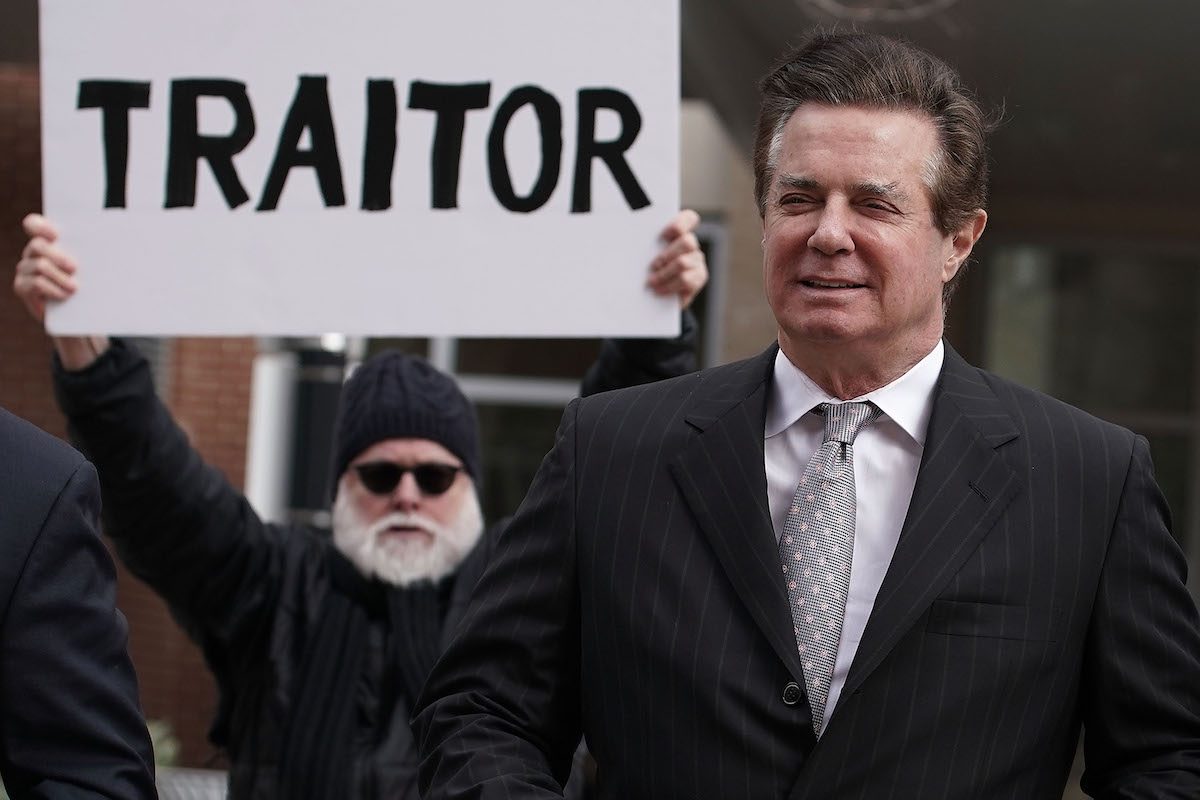 Paul Manafort, Donald Trump’s former campaign chairman, has been sentenced to just shy of four years in prison for bank and tax fraud. His crimes were uncovered by the Mueller investigation into his connections to Russia and his work in Ukraine, but they don’t directly relate to his work on the Trump campaign. Of course, that doesn’t stop Trump from thinking he’s been exonerated.

Both the Judge and the lawyer in the Paul Manafort case stated loudly and for the world to hear that there was NO COLLUSION with Russia. But the Witch Hunt Hoax continues as you now add these statements to House & Senate Intelligence & Senator Burr. So bad for our Country!

Manafort’s sentence of 47 months (minus the nine months he’s spent in jail awaiting sentencing) was far less than what prosecutors recommended. Under sentencing guidelines, they suggested he should serve 19 to 24 years. The judge in the case, Judge T.S. Ellis, said that sort of sentence would be “excessive,” saying Manafort had “lived an otherwise blameless life.”

For starters, that’s just not true. As a lobbyist in D.C., Manafort spent decades (and made a fortune) lobbying on behalf of foreign dictators and kleptocrats with histories of human rights abuses. One group of clients was literally referred to as the “torturers’ lobby.”

Paul Manafort is not a swell dude.

Blameless Paul Manafort committed crimes while he was in jail awaiting trial for his other crimes.

But even if he were “otherwise blameless,” his sentencing is a glaring window into how unbalanced the legal system is. Public defender Scott Hechinger gave some perspective on Twitter, sharing the far harsher sentences he’s seen his clients get.

For context on Manafort’s 47 months in prison, my client yesterday was offered 36-72 months in prison for stealing $100 worth of quarters from a residential laundry room.

My colleague’s client today was forced to plead out to the mandatory minimum of 3.5 years (5 months shy of Manafort) for simple possession of a firearm. No allegation of use. Prosecution wouldn’t drop top count after a hearing. Best they had been willing to do was 2 years.

3 years ago, in the court in which I work, a Brooklyn teenager was sentenced to 19 years (15 more than Manafort) for setting a mattress on fire that inadvertently lead to the death of a responding officer for smoke inhalation. https://t.co/WAbvwG4mxp

Hechinger makes sure to clarify that he’s not advocating for harsher sentences for anyone, including Manafort. “I am simply pointing out the outrageous disparity between his treatment and others, disproportionately poor & people of color,” he writes.

As a public defender in a right wing area of a right wing state, I am disgusted. Saw a kid get 15 years today for stealing lawnmowers and equipment worth less than $50K

The chasm in our dual justice system is an infinite divide.

Paul Manafort was just sentenced to less than 4 YEARS for committing multiple felonies, including tax and bank fraud

Crystal Mason is serving FIVE YEARS for trying to vote in the 2016 election. (She didn’t realize she was ineligible due to a prior conviction.)

This is Ruben Lopez. He spent 20 years in prison for 1.8 grams of meth because of strict sentencing rules.

Paul Manafort getting such little jail time for such serious crimes lays out for the world how it’s almost impossible for rich people to go to jail for the same amount of time as someone who is lower income.

Wouldn’t it be nice if our courts extended the same leniency to young Black men and women every day as they did to Paul Manafort? https://t.co/EDwex1MDHD

#Manafort: 47 months for a lifelong carnival of criminality.
Petraeus: 0 days for trading the country’s highest secrets for a more favorable biography.
Manning: 35 YEARS for revealing evidence of actual war crimes to the press.

Your sentence derives from your proximity to power.

FYI in 2018, #JudgeEllis sentenced Frederick Turner, 37, to a mandatory minimum of 40 years in prison for dealing methamphetamine: “I chafe a bit at that, but I follow the law. If I thought it was blatantly immoral, I’d have to resign. It’s wrong, but not immoral.” #PaulManafort

In 2015 #JudgeEllis sentenced a former University of Rochester business professor, who paid $100 million in fines for failure to disclose income and control over his Zurich-based bank accounts, to seven months in federal prison.

A true judge for the rich.https://t.co/6nkU9PCO8X

Manafort has another sentencing next week with a different judge, for different crimes. Manafort pled guilty to conspiracy against the United States last year, which could add up to another decade to his sentence. Trump won’t say whether he plans to pardon Manafort or not, adding to our neverending national stress game of wait-and-see.