A Love Letter to Hellcat's Incredible Representation | The Mary Sue

A Love Letter to Patsy Walker, A.K.A. Hellcat!’s Incredible Representation

And a sad goodbye. 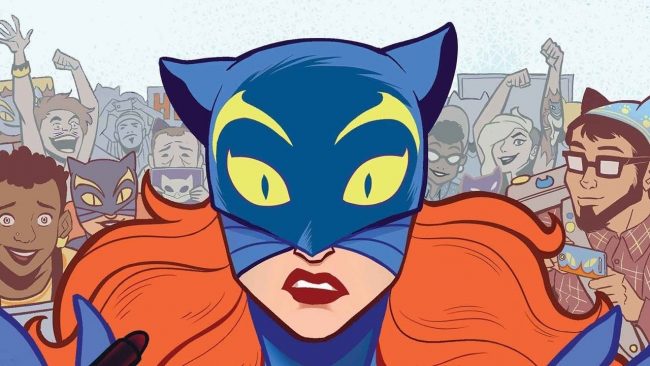 Comic books don’t always do great when it comes to representation. From blatant whitewashing to tone-deaf character developments, there have been more than a few missteps along the way. But even with setbacks, troubles, and the occasional all-out social media battles, there are strides in the right direction. And one of the best examples of positive representation in comics today stars a character known as Patsy Walker, AKA Hellcat.

Hellcat is an all-ages comic that truly lives up to that title. It is indeed for all ages, up to and including adults. It follows the ongoing adventures and mishaps of Patsy Walker, better known as longtime Marvel heroine Hellcat. Patsy Walker struggles to find a steady balance between her professional, personal, and super-hero lifestyle. This formula might sound familiar, but from there Patsy walks to the beat of her own drum—one that other Marvel comics could do well to follow.

Hellcat features quite probably the most diverse cast of characters in a major comic book publication (and if anyone can think of another one that stands against it, please let me know). Age, race, gender, and sexuality are all represented amongst the people with whom Patsy interacts. Perhaps more significantly, each of these characters is treated with genuine respect and affection. You find yourself caring for them, as they care for each other.

Writer Kate Leth (Spell On Wheels) has a masterful, matter-of-fact way of introducing characters to her audience, regardless of how they identify. Their personal identities aren’t overlooked or brushed aside—they are simply treated as another aspect of the characters. It’s smart and respectful, two things left sorely lacking in today’s comic world. Coupled with the gorgeous and pitch-perfect art of Brittney Williams, the characters are richly complex (and beautifully rendered).

In all the issues of this series, there has not been a single ‘Very Special’ moment. None of the wide variety of characters are treated as an outsider or some sort of precious token. These are the people in Patsy Walker’s life, and she loves them (or loathes them, but more on that later). End of story.

This is important, particularly in an all-ages comic, because it reminds us that the world is not simple. You’re going to meet all sorts of people from all walks of life in this world. Some will be loyal friends like her remarkable roommate Ian; others will come complete with their own set of problems, like the villainous Hedy Wolfe (more on her later). Leth doesn’t compromise herself or her writing style in this universe; you’re not going to see a whitewashed world here. That would be selling herself (and her audience) short. We get a group of characters that are as varied and unique as the ones you meet in daily life, and the results are a joy to behold.

There’s another reason Hellcat is so remarkable: it has a wonderfully complex cast of women from the Marvel universe. It’s a delightful thing to see everyone from She-Hulk to Squirrel Girl hanging out, swapping stories and sharing adventures. And every single one is written with intelligence, humor, and heart. There’s no falling back onto trite romantic triangles; these women support and raise each other up. Who’s going to waste time being catty (pun intended) when there’s adventure afoot?

That’s not to say that everything in the world of Hellcat is always ice cream and sunshine (although in the often dark world of comic book heroes it is refreshingly full of light and joy). There are serious issues tackled and hard moments to handle. Perhaps one of the most honest and devastating was how Patsy Walker dealt with the fallout from the Civil War II arc. What do you do when your friends are turning against each other and you run the risk of losing the people you care most about? You focus on what you can do. You focus on the things you can change. You make a decision to keep going, and stand by it. In these often turbulent and terrifying times, that’s a message that resonates.

But what, you may ask, of the villains in Patsy Walker’s world? Are they as accepting and open as the good guys, or are they caricatures of bigots? Neither, as it turns out; Leth’s villains and antagonists are as diverse and complicated as her heroes and sidekicks. Some are indeed close-minded and prejudiced, but this is never done in a gimmicky way. And many of her villains are accepting of the diverse cast of characters, even as they run around doing evil things. Real life is often messy and complicated, and villains are invariably more intriguing when they have good traits mixed in with their evil ones. Just because Hellcat is aimed at all ages doesn’t mean it has to dumb down the subtleties of real life. The comic respects its readers, regardless of age, and the payoff is immense.

There are a host of different relationships in the world of Hellcat, and many have no romance at all. There’s the love between friends, the mutual respect (if not outright affection), of work colleagues, and the complicated backstory between Patsy and her nemesis/frenemy, Hedy Wolfe. These two aren’t fighting over anything as trite as a guy (Patsy has enough relationship issues to deal with already, thank you very much); instead, the nut of their issue is Patsy’s past. Hedy owns the rights to the books based on Patsy’s high school years. Patsy, understandably, isn’t thrilled about this level of celebrity that she never asked for. Their give and take (within the legal world and facing off head to head) are a fascinating play between two complex characters, each with their own agenda. Patsy is ultimately fighting for her past, her autonomy, and her identity—which Hedy is holding on to for complicated reasons of her own.

If this all seems like pretty heavy reading, let’s make one thing clear: Patsy Walker, AKA Hellcat is one of the funnest and most hilarious books Marvel has published. All these issues are placed against a bright and bubbly backdrop, and feature some of the sharpest and funniest writing currently taking place in the comic world. It’s clever, incisive, and features characters you can’t help but love.

Hellcat is ending this month, and I am genuinely sorry to see it go. Although the conclusion is based on the wishes of the creative team, I can’t help but selfishly wish that we could have gotten more of the life and times of Patsy Walker and her group of superior companions. Leth and Williams have created an all-ages comic that redefines representation and has a narrative that will stand the test of time.

If you haven’t read it, I strongly suggest you go grab a copy. It will show you how representation in comics can be done right (and we can only hope that the comic industry is paying attention), perfectly complementing both the visual and narrative storytelling of the genre. It’s a testament to the power of how strong female relationships, a diverse cast of characters, and a truly dynamic creative team ended up working on one of the best books out there.

Our heroine is messy and complicated. She makes mistakes and laughs at herself. She stands for her diverse group of friends and fiercely fights for what is right. She gets knocked down (oh, does she ever get knocked down), but she always gets back up. When things get bad, she laughs at herself and keeps going. In a world of superheroes, she is defiantly original and profoundly human (aside from those sweet superpowers of course). She’s kind and fallible, and genuinely, laugh-out-loud funny. But that’s what fans have come to know and love about the indomitable Patsy Walker, AKA Hellcat.

Lauren is a writer, social media consultant, and pop culture junkie. She enjoys consuming too much caffeine and shouting about comics and television. You can follow her on Twitter here or like her on Facebook here.