Patrick Stewart Sings Cowboy Songs, Because He and His Wife Are a Beautiful Pair of Weirdos 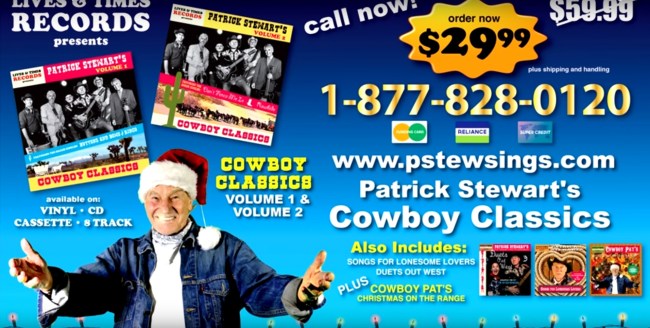 Patrick Stewart and his wife, singer Sunny Ozell, are the kind of couple who announce their marriage like this:

So, it should come as no surprise that this beautiful pair of weirdos would team up to do something equally looney to raise money for a good cause. Check out this fauxmercial, directed by Ethan Eubanks, starring Stewart as he advertises his myriad albums of cowboy songs! Watch with glee as he and Ozell team up on “I Am an Old Cowhand” for absolutely no discernible reason. It’s four minutes and thirteen seconds of sublime quirkiness:

The best part? While the albums advertised in this video are all fake, you can download a 5-song sampler on which Patrick Stewart sings “Buttons and Bows,” “Don’t Fence Me In,” “Ringo,” “I’m an Old Cowhand,” and “Here Comes Santa Claus.” All the info can be found at his PStewSings website, and proceeds from the sampler sales go to an organization called International Rescue Committee, which helps crisis-affected families around the world.

Parlaying their weirdness into a way to help others? I’ve got to say, Stewart and Ozell are pretty rad.