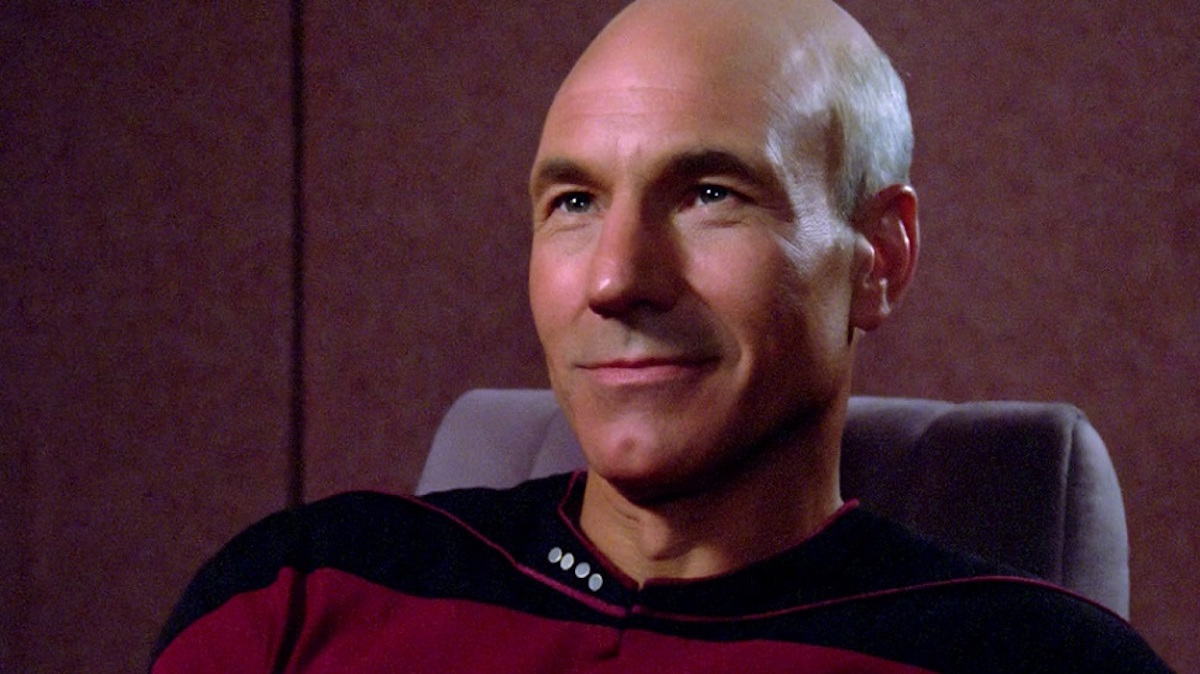 He’s back! Sir Patrick Stewart is committed to making the world a better place by returning to TV as Star Trek: The Next Generation‘s iconic Jean-Luc Picard. Now we can see the man himself, as well as the logo for the upcoming CBS All Access series, which has been officially designated Star Trek: Picard.

Any doubt that this will truly be the Picard show can now be set aside, as CBS confirmed the long-rumored title of, well, Star Trek: Picard at recent Upfronts in New York. Here is the show’s shiny new logo in all of its glory:

Admit it, you love how they worked the Starfleet insignia into the A as much as I do. As Comicbookmovie points out, however, everything we know about the show suggests we pick up at a time when Picard has ostensibly left Starfleet behind him:

The plot of the series is still firmly under wraps. In fact, all we know for certain is that the story will revolve around the aging Picard coming out of retirement to offer his expertise to Starfleet after the destruction of the planet Romulus, which occurred in the 2009 Star Trek reboot.

And here’s the retired man of the hour himself:

A teeny look at the #StarTrek #Picard show coming to @CBSAllAccess. #Upfronts pic.twitter.com/1uiUkPi81r

Per the official Star Trek Twitter account, here’s how you’ll be able to tune in, depending on where in the Alpha Quadrant you are. They Tweeted:

#StarTrek: Picard will stream exclusively on @CBSAllAccess in the United States, on Amazon #PrimeVideo in more than 200 countries and territories and in Canada on Bell Media’s @SpaceChannel and OTT service @CraveCanada. @StarTrekCBS @primevideouk https://t.co/f3mVPY449M pic.twitter.com/iDrmtDiQLg

Or you could hear it straight from the horse’s mouth:

Incoming Transmission from @SirPatStew! The untitled “#StarTrek” Jean-Luc Picard series will stream exclusively on Amazon Prime Video in more than 200 countries+ outside the US & Canada and on CBS All Access in the United States. #primevideo @primevideouk https://t.co/UgxPFcRyaT pic.twitter.com/gzAZBVe0MR

Only the US and Canada won’t be able to watch the show on AmazonPrime like the rest of the universe. At least Canada seems to have an entire Space Channel? Tell us more.

Curious about the future fashion in this Trek, which takes place twenty years after we last saw Picard in action?

This set pic gives us a better look at the uniforms for #StarTrek: Picard. Seems to be an updated version of the DS9/VOY uniforms with TNG style collars and the badges from ‘All Good Things’. pic.twitter.com/yZJ1sC6apx

Wow no wonder Jean-Luc is of arched brow in the picture above:

Hmmm @CBS upfront had a clip (or probably something made just for upfront) of “Star Trek: Picard” (what they called it) with a Starfleet officer asking Jean-Luc, “May I have your name, please, sir?” as Picard appears incredulous. @StarTrek

I’ve already seen a couple of trolls on Twitter starting to foment that this will be a real Star Trek show, unlike (in their opinion), Discovery. Those trolls should know that the Picard showrunner is Alex Kurtzman, who wrote Star Trek: Into Darkness and is an executive producer and co-creator of Discovery, so there’s that. Hanelle Culpepper, who directed on Discovery as well as more than two dozen other shows, is also set to direct the show’s pilot and first episode, according to Comicbookmovie. I’m excited to see the show pick an experienced woman of color director for its pilot; this was a fantastic move. I’m more than a bit wary of Kurtzman’s showrunning, but that’s a topic for another day. Today, let’s celebrate Jean-Luc.

While we don’t know when we’ll be getting the series (though we’ve been promised 2019), and we still know few details about its plot, seeing Picard back in action among a sea of Starfleet uniforms is making me emotional. Are you ready for Star Trek: Picard?