They'll miss them in the saddest fashion. 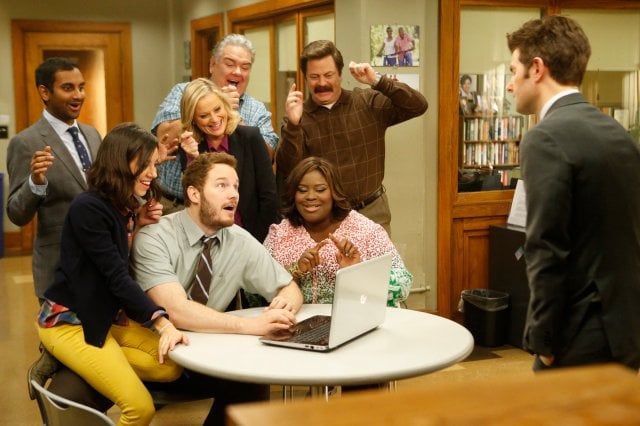 My beautiful, rule-breaking moths, there is hope post Parks and Rec. The residents of Pawnee, Indiana taught us how to treat ourselves, our friends, and our roombas, but their legacy will also live on at the IRL Indiana Office of Tourism Development, whose employees wrote an adorable open letter to the show earlier this week assigning each character to an Indiana town.

Leslie Knope- Full of optimism and a can-do spirit; no obstacle is too big that it can’t be overcome by her determination. She is tough and intelligent. She works hard and gets the best of those around her. She isn’t interested in personal praise; she just wants the satisfaction of making her community a better place. She embodies all that it means to grow up and live in Indiana. Looking at the Indiana map, there is no more fitting town that captures the spirit of Leslie Knope, and best defines Indiana, than Hoosierville.

Ron Swanson- The man buries his gold, drinks Lagavulin, loves breakfast foods and eats red meat; lots and lots of red meat (courtesy of Food ’n Stuff). His cabin in the woods is surrounded with mines. Oil-soaked rags next to a burning fire in his woodworking shop? That’s none of your business, please and thank you. Any infringement upon his personal freedom makes his mustache twitch. Don’t bother him, and he won’t bother you. Ron Swanson is Liberty, Indiana.

Tom Haverford- The entrepreneur. The visionary. Unique, unexpected and authentic. Tom thinks beyond his environment and has ideas that are sometimes ahead of their time. Tom is Columbus, Indiana. An architectural mecca, Columbus is a surprising city with a rich cultural heritage that is always looking for ways to continue its artistic and economic growth. Just like Tom.

April Ludgate-Dwyer- April is exotic. April is mysterious. April is sophisticated and April is intelligent. April could be Peru, Brazil, Rome or Warsaw. She represents Indiana’s small-town charm and global influence. April is Mexico, Cairo or Dublin. Paris, Alexandria or London. Manhattan, Jordan or Holland. Versailles, Shanghai… you get the point.

Andy Dwyer- Gas City. No reason in particular, other than we think he would just really giggle at the name. It would also be the perfect venue for the next MouseRat concert.

Ben Wyatt- Ben is a lovable nerd. Comic books, Game of Thrones, Settlers of Catan, Cones of Dunshire; Ben embraces nerdery’s complete canon. No town in Indiana better represents Ben Wyatt than Odon, Indiana. Odon, deriving its name (although a slightly different spelling) from Odin, the Allfather of the gods and ruler of Asgard in German mythology, is a name as close to Middle Earth as you’ll find in the Hoosier State. But Ben probably knew that already. He’s also probably mad we spell it with the second “o.”

Donna Meagle- There’s one place and one place alone in our state that typifies Donna. It isn’t a city, but a man-made edifice to commerce. A place where high-end fashion and consumer goods are sold to those with only the most discerning of tastes. Tiffany’s, Burberry, Apple, Coach and Louis Vuitton- they’re all there. The Fashion Mall at Keystone in Indianapolis. Go on Donna, get in the Benz and Treat Yo’ Self!

Ann Perkins and Chris Traeger- We literally (or as Chris would say litch-early) cried when Ann and Chris drove out of Pawnee; and to Michigan of all places! The Perkins-Traeger union belongs in Indiana. Come back and raise your son Oliver in Oliver, Indiana.

Most government is an unconscionable waste of taxpayer time and money, but Indiana’s Office of Tourism definitely knows the way to our hearts.