A family unconventional enough for Steven Universe and dark enough for Dr. Strangelove! 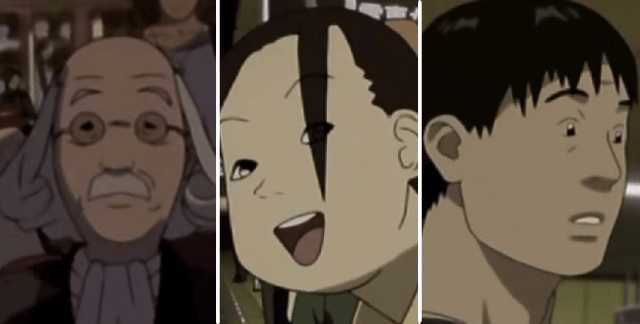 This time on The Narratively Weirdest Tragicomic ever, we are plunged into the first of three episodes that are divergent from the main conflict of the social phenomena and the surrounding mystery, taking place where little to no context is needed to pick up on a special pervading theme or to understand the one-off characters that wind up being as didactically important as they are memorable. It’s a notable example among a string of outliers in that it’s a comedy as black as your socks after walking through a dirty kitchen, centered on not one, but three misbegotten folks and their relation to the supernatural forces taking over the town.

Small preface regarding that particular tonal aspect of the episode: I think it’s only fair to say that we’re going to be dealing with some pretty heavy material in regards to suicide and … well … a kid attempting suicide presented in comedic framing. And … well, I don’t think that I could properly communicate the humor through non-timed text fare, so please don’t rely on this write up to “get it.” So! Don’t say I didn’t warn ya!

The episode opens up as enigmatic as ever, with the main action starting (a guy walking though town) as some important back-info on the surrounding narrative is given through a previously established forum chatlog that sort of takes you out of the primary story. It winds up being some super important info on “Fox”  (our friend Kozuka) by the end, and it’s prevalent throughout the episode and all in Japanese, so yeah, go ahead and keep the subtitles on for this one.

We’re introduced to two men wandering about town, one old, one big, and both identifiable by their Little Maromi backpacks. The chatlog is initially intentionally ambiguous, simply stating plans about a “big day” that three people are preparing for. Things start getting fishy when Zebra and Fuyubachi, as they are known online, meet the third party named Kamome and see that she’s little girl who seems eerily eager for something she’s supposedly a bit young for. From there begins a comedy of errors that would make Charlie Chaplin sit down for some note-taking.

This point is probably the best time to note that what the episode is defined by (and what’s going to be the primary focus of this little writeup) is a type of subtle, fractured style of storytelling. It moves from one scene to the next of farcically spectacular failures in suicide—sometimes caused by each other, sometimes by environmental factors that leave us with some nice characterization. Adding to this is the fact that the entire tone of the episode takes the form of a simple family outing, from talks of experiencing new things together (like train rides and mountain hikes) to jaunty, carefree music along with imagery of the trio holding hands and singing along with each other.

The correlation mentioned between the type of janky storytelling and the larger narrative is also seen in some downright tasteful, interesting characterization that is prevalent without being heavy-handed. It’s interesting to see how they essentially walk themselves through death, from expressing their individual fears of loneliness and pain to sub-textual implications of why they would want to commit suicide. Zebra was probably pushed to the brink due to his status as a sexual minority, and Fuyubachi suffered some undefined mental illness he was trying to distance himself from, as evidenced from his insistence on the packaged medicine on hand being “his last pill.”

We see what this means for him when his illness acts up towards the end. Multiple times during the episode, it’s made fairly clear that they’re all afraid of dying alone and in pain. All of that really helps to strengthen the framed situation of a “suicide pact.” Again, this is all presented in quieter, quick moments that really go along well with the chat framing. You don’t necessarily have to pick up on all of that to get the tone or general purpose of the macabre comedy (and the punchline at the end), but it does really help when trying to get some sort of emotional resonance out of the episode.

Rachael’s a student at a Florida university that frolics regularly in Disney parks and has an entirely too extensive collection of stuffed animals. If you wanna follow her other random musings on cartoons (or just stop by to say hi) there’s her blog https://lotsofframes.wordpress.com/.