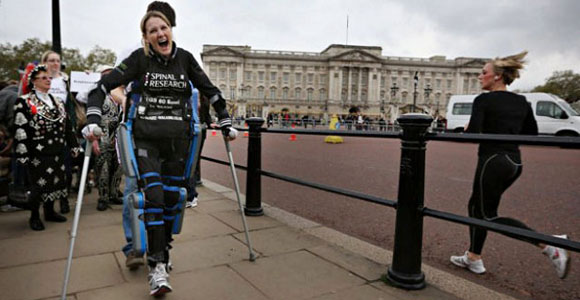 Claire Lomas was paralyzed from the chest down after a horse riding accident in 2007 but recently utilized a robotic exoskeleton to complete the London Marathon in 17 days. Now she gets to see how the technologically advanced suit works at home.

Lomas used a ReWalk suit created by Argo Medical Technologies (which you might have seen on Glee). According to their website, “As part of the clinical trials, the ReWalk was initially only available to those selected patients in PA, NJ , and Del. After completing successful trials and receiving FDA approval, the ReWalk-I is NOW being offered nationally to rehabilitation centers so that care givers can get their patients to stand and walk.”

The company backed a bid for the marathon and Lomas was able to raise around $317,900 for spinal damage research. The suit itself costs $71,000.

“The exoskeleton is activated by the wearer tilting their balance to indicate the desire to take a step. It supports the body’s weight and also allows the person to go up or down stairs, as well as sit or stand up independently,” writes Reuters. “The developers argue that savings on the treatment of ailments related to inactivity could offset the cost.”

They continue, “The company estimates that of the 6 million wheelchair users in the U.S. and Europe, around 250,000 could be suitable for using the ReWalk device. A report in 2010 by U.S. firm ABI Research forecast the market for this technology could be worth $320 million within 10 years.” They also remarked the U.S. and Israeli military are interested in the tech for injured soldiers but Lomas is happy with its every day advantages.

“One of the best experiences was standing at a bar,” she said.

Lomas had the job of lighting the Paralympic cauldron in Trafalgar Square this year but isn’t quite done with her accomplishments yet. Reuters writes, “Next year [she] plans a London-to-Paris bicycle ride using a so-called Functional Electrical Stimulation bike that artificially stimulates the paralyzed rider’s own muscles to propel it along.”

(via Reuters, top image via Ubergizmo, ReWalk suit via Technovelgy)