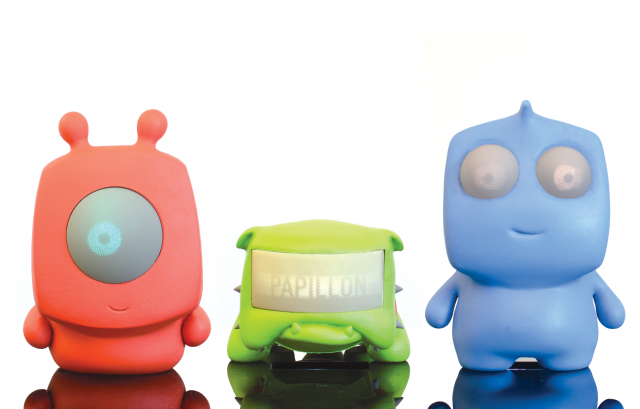 Disney’s always been on the forefront of animatronic technology — just ask all the surprisingly lifelike dudes who live in the Hall of Presidents. So it’s no surprise that they’re looking to ramp up the level of interactivity possible, and the 3D-printed optics on these toys are a good first step. You know, when they’re not creeping us out a bit with their cold laser gaze.

Called PAPILLON, which means that it’s either been named for the French word meaning “butterfly” or for the breed of fancy spaniel lapdogs, the eyes debuted at ACM SIGGRAPH 2013 this past week in Anaheim, California. These figures in this particular series are each about the size of a softball and have been given the names Beep, Boop, and Iggy, which instantly makes me like them that much more. Yes, your animated Cyclops-style visor-eyes are really off-putting at first glance, but you’re a little green pit bull named Iggy! I can’t stay mad at you!

According to the Disney Research Institute in Pittsburgh:

the eyes are printed slice-by-slice using transparent photopolymers separated by a translucent support material. PAPILLION is based on a set of algorithms that implements classic Fibonacci spirals and Voronoi tessellation for efficient packing of fibers on a surface of an eye and in the bundle. This allows creating arbitrary curved display surfaces while minimizing visible artifacts, such as light distortions on the edges of the eye. The resulting technology is effective in designing compact, efficient displays of a small size and shape that can have a broad range of applications.

Which, in layman’s terms, means that these aren’t projections onto the face of the figures: Their eyeballs are actually being lit up from within to express a wide range of emotions, as demonstrated by the below video:

In addition to hearts and sleepy Zs — those are emotions, right? — PAPILLON is also capable of the below expressions that were clearly all ripped straight from Japanese emoticons.

Yup, sometime in the future your toys will be capable of getting bored of you. I suppose that’s better than them being “focused,” which… gaah.

As creepy-cute as Iggy the “dog-like pet” is, though, PAPILLON is not currently available for purchase. In the official press release, however, senior resaerch scientist Ivan Poupyrev said that he envisioned the optic eyes being used down the line for “building interactive toys, supplemental characters for video games, robots or perhaps eventually even human prosthetic eyes.” Somewhere the long-dormant Repo: The Genetic Opera fandom just got really excited that Blind Mag’s eerie surgically enhanced eyeballs are that much closer to becoming an actual thing.

(via Geek, images via Disney Research)