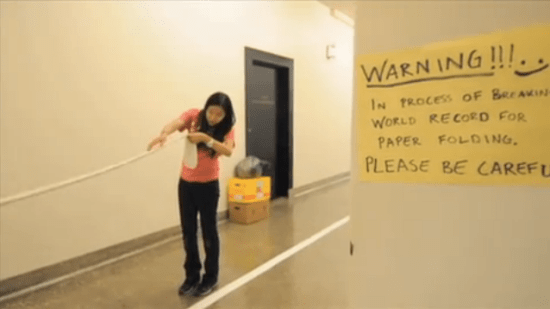 Within MIT’s Infinite Corridor, a group of 15 St. Mark’s School students and teacher James Tanton claim to have set the world record for folding paper by folding 13,000 feet of toilet paper 13 times, breaking the previous world record of 12 folds. The team folded the toilet paper in half and in the same direction each time. Tanton had been attempting to break the previous record of 12 folds–set in 2002–for the past five years, all of which were unsuccessful attempts until he made contact with MIT’s origami club, OrigaMIT, to help his team get access to the Infinite Corridor, a hallway long enough for his team to fold without interference from the wind.

For those wondering, the team used single-ply toilet paper–obviously not concerned with its cushiony comfortableness–which Tanton ordered from important website ToiletPaperWorld.com. Though the team clearly matched the previous record’s 12 folds, the team’s 13th fold was reportedly debatable: The fold was achieved, but the finished stack of folded toilet paper had trouble staying folded without support. Tanton said he will attempt the feat again next year, this time using 24,000 feet of toilet paper in order to achieve a final fold that can remain folded on its own.