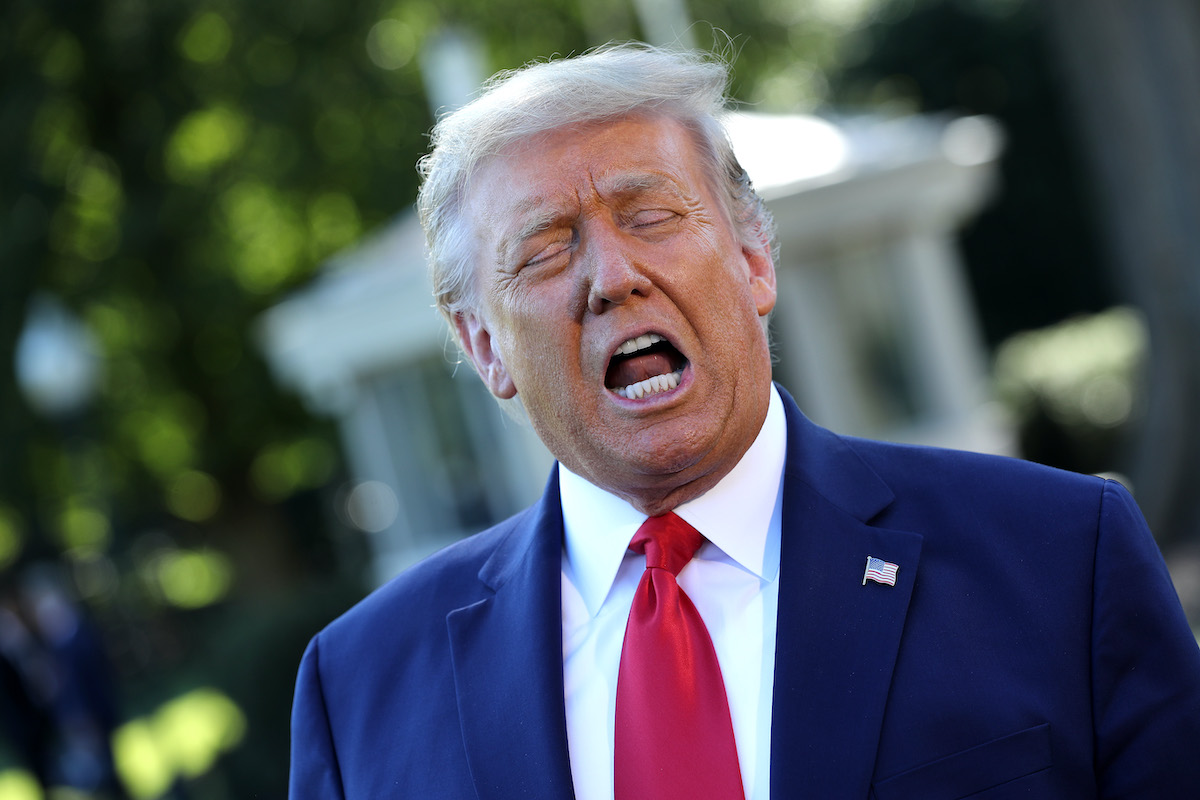 News broke late last night that Donald and Melania Trump had tested positive for COVID-19, following news earlier in the evening that Hope Hicks, an adviser who had been in close contact with him over the preceding days, had tested positive. It’s hardly surprising at this point, with his aversion to masks (which he mocked Joe Biden over at Tuesday’s debate) and other precautions, that he’s contracted the virus, much like it’s unsurprising that he and his cronies continued to endanger others right up to news of his own positive test result—and beyond.

For the foreseeable future, Trump will be confined to the White House, participating in campaign events from a distance at most—including hosting a call today with vulnerable senior citizens about coronavirus support—although who knows what will happen if his reportedly mild symptoms worsen. Other than that call, Trump’s schedule for the day, which included a fundraiser and rally, has been cleared, but those mild symptoms were reportedly present at a fundraiser that he attended last night, just hours before he announced his positive test result.

At that fundraiser, one aide said Trump came in contact with as many as 100 people, which is just mind bogglingly irresponsible for someone who knew he had been in contact with someone carrying a dangerous, contagious disease. Although, again, it’s hardly surprising when handling this virus irresponsibly has been Trump’s hallmark:

Statement for @SenSherrodBrown includes this: “I’m extremely troubled by the reports that the President’s family and staff refused to wear masks at the debate in Cleveland, and then held a fundraiser the next day – endangering all who worked at and attended these events.” pic.twitter.com/ABNIUIDShl

I witnessed a Cleveland Clinic doctor remind Trump’s guests to wear a mask, even offering them surgical ones on the off chance they didn’t have one. None of them put on a mask.

The doctor looked frustrated as she stepped away, prompting a staffer to say, “That’s all you can do.” https://t.co/ShthfC23Gr

You can literally watch a US Senator with no mask who has now tested positive hugging people here on the WH lawn — in open violation of health rules. https://t.co/QQBmfsVkgr

We still don’t even know when Trump found out he had tested positive, or really much of anything, as the White House is predictably secretive about what’s going on. Even still, Hope Hicks’ positive test should have been reason enough for everyone who had recently had contact with her to quarantine immediately, but Hicks reportedly tested positive on the evening of September 30, after which Trump held a fundraiser in Shorewood, Minnesota, then flew to a rally in Duluth, then traveled with Hicks and others on Thursday before that Thursday fundraiser in Bedminster, New Jersey, after which New Jersey Governor Phil Murphy has urged everyone in attendance to quarantine themselves and get tested—the responsible thing to do.

We urge everyone who attended yesterday’s event in Bedminster to take full precautions, including self-quarantining and getting tested for #COVID19.

Trump has long been cavalier about the risk of catching and spreading the novel coronavirus, bragging at the debate about the crowd sizes at his rallies and claiming it was a lack of support, rather than safety, that was keeping Joe Biden from holding similarly sized events. (I hope Joe Biden is being responsible by quarantining and taking every possible precaution after standing on the debate stage, mask-less, with Trump.) And look, he could very well come out of this fine, but not everything is about him. There’s a long list of even just those closest to him who are at risk:

And, predictably, still not all of them are interested in taking appropriate precautions, with Rep. Jim Jordan already reportedly not quarantining after likely exposure and his chief of staff giving a mask-less press briefing despite also being on that list.

Per @HallieJackson: Jim Jordan was exposed to Hope Hicks without a mask, as well as both Melania and Donald Trump who have now also tested positive for Covid-19. @Jim_Jordan is refusing to quarantine, which will expose many others on Capitol Hill to the virus.

Jim Acosta Catches WH Staff Without Masks After Trump’s Diagnosis, Calls Them Out: ‘Not Everybody Has Gotten the Memo’ on How Serious This is https://t.co/NbZT55gm8B

Health Secretary Alex Azar, on the Trump family’s failure to wear masks at the recent debate despite a requirement for the audience to do so:

“The first family is a different situation than the rest of us,” because they are in a protective bubble.

After Trump tests positive, Chief of Staff Mark Meadows addresses the press WITHOUT A MASK.

He says he doesn’t need one because he tested negative.

It doesn’t work that way.

Official says masks will still not be mandatory at the White House, even after president tested positive for the virus. The official described facial coverings as “a personal choice,” despite overwhelming evidence that they help stop spread of virus. https://t.co/l9wGB4pTVj

Somehow, some still fundamentally fail to grasp the connection between taking precautions and things going well:

Does anyone else find it odd that no prominent Democrats have had the virus but the list of Republicans goes on and on?

All that aside—or, really, because of it—it’s not only Trump’s closest allies, aides, friends, and supporters who have been endangered here. They also all unnecessarily contributed to—and continue to contribute to—the spread of this pandemic, as Donald Trump himself continued his attempt to pivot to reality-averse messaging that the whole thing was already on the way out. People who had nothing to do with Trump’s pandemic denial and flouting of precautions will be hurt by this, and that’s who I feel sorry for the most, as conservatives try to make this about the left not having enough sympathy for a man who mocked Hillary Clinton for having pneumonia in 2016—four years ago today.

Hey, buddy, maybe you should sit this one out? pic.twitter.com/aycLyPXcye

I have no “glee” that Donald Trump caught this virus. I’m furious that it wasn’t well enough contained by now to avoid all this, and that it’s still not being taken seriously—and that if Trump winds up with a milder case of it, he’ll use that as an excuse to continue to downplay it and hurt more people.

Trump was just one of 43,000 other Americans who tested positive for COVID today. While nearly all of them paid more in taxes than he did, few will have his resources to fight the ravages of the disease and recover from its financial aftershocks.