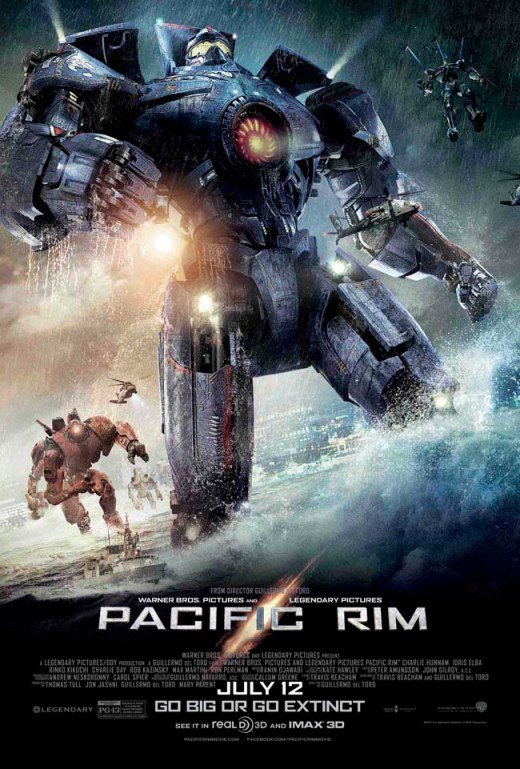 We here at The Mary Sue have been pretty excited for Guillermo del Toro’s Pacific Rim (Check out the official site!) for a while now, so you can bet we high-fived when we found out we had the opportunity to get The Mary Sue readers in on the fun. Hit the jump and see the amazing Pacific Rim prizes we have to give away!

Throw your email in here.

Really, it’s that simple! We won’t even sign you up for our newsletter or anything. (Although you can totally do that above and to the right of this post, we won’t stop you.) You have from now until Monday, July 15th at 12:10 pm to get your email address in there. Shipping is only available to the U.S. and Canada. We’ll randomly choose one winner to get the entire prize pack. Good luck!

Here are some more rules and information:

BY ENTERING THE SWEEPSTAKES, ENTRANTS RELEASE AND HOLD HARMLESS WARNER BROS. ENTERTAINMENT INC. AND EACH OF ITS RESPECTIVE PARENTS, DIVISIONS, AFILIATES, SUBSIDIARIES, AGENTS AND ADVERTISING AGENCIES (COLLECTIVELY, “WBEI”) FROM AND AGAINST ANY AND ALL LOSSES, DAMAGES, RIGHTS, CLAIMS, AND ACTIONS OF ANY KIND ARISING IN WHOLE OR IN PART, DIRECTLY OR INDIRECTLY, FROM THE SWEEPSTAKES OR PARTICIPATION IN ANY SWEEPSTAKES-RELATED ACTIVITY (INCLUDING WITHOUT LIMITATION THE REMOVAL FROM THE SITE OF, OR DISCONTINUATION OF ACCESS TO, ANY MATERIALS), OR RESULTING DIRECTLY OR INDIRECTLY, FROM ACCEPTANCE, POSSESSION, USE, OR MISUSE OF ANY PRIZE AWARDED IN CONNECTION WITH THE SWEEPSTAKES, INCLUDING WITHOUT LIMITATION PERSONAL INJURY, DEATH, AND/OR PROPERTY DAMAGE, AS WELL AS CLAIMS BASED ON PUBLICITY RIGHTS, DEFAMATION, AND/OR INVASION OF PRIVACY.

IN NO EVENT WILL THE WBEI BE RESPONSIBLE OR LIABLE FOR ANY DAMAGES OR LOSSES OF ANY KIND, INCLUDING WITHOUT LIMITATION DIRECT, INDIRECT, INCIDENTAL, CONSEQUENTIAL, OR PUNITIVE DAMAGES, ARISING OUT OF ANY ACCESS TO AND/OR USE OF THE SWEEPSTAKES SITE, THE DOWNLOADING FROM AND/OR PRINTING MATERIAL DOWNLOADED FROM THE SWEEPSTAKES SITE, THE REMOVAL FROM THE SWEEPSTAKES SITE OF, OR DISCONTINUATION OF ACCESS TO, ANY MATERIALS, OR THE ACCEPTANCE, POSSESSION, USE, OR MISUSE OF, OR ANY HARM RESULTING FROM THE ACCEPTANCE, POSSESSION, USE OR MISUSE OF, OR PARTICIPATION IN, ANY PRIZE AWARDED IN CONNECTION WITH THE SWEEPSTAKES. WITHOUT LIMITING THE FOREGOING, THE SWEEPSTAKES, ALL PRIZES, AND ALL MATERIALS PROVIDED ON OR THROUGH THE SITE ARE PROVIDED “AS IS” WITHOUT WARRANTY OF ANY KIND, EITHER EXPRESS OR IMPLIED, INCLUDING WITHOUT LIMITATION THE IMPLIED WARRANTIES OF MERCHANTABILITY, FITNESS FOR A PARTICULAR PURPOSE, AND NON-INFRINGEMENT.

Be the first to know about Warner Bros. Special Offers, Updates and More. Just click the image below:

From acclaimed filmmaker Guillermo del Toro comes the sci-fi action adventure “Warner Bros. Pictures and Legendary Pictures PACIFIC RIM.”
When legions of monstrous creatures, known as Kaiju, started rising from the sea, a war began that would take millions of lives and consume humanity’s resources for years on end. To combat the giant Kaiju, a special type of weapon was devised: massive robots, called Jaegers, which are controlled simultaneously by two pilots whose minds are locked in a neural bridge. But even the Jaegers are proving nearly defenseless in the face of the relentless Kaiju. On the verge of defeat, the forces defending mankind have no choice but to turn to two unlikely heroes—a washed up former pilot (Charlie Hunnam) and an untested trainee (Rinko Kikuchi)—who are teamed to drive a legendary but seemingly obsolete Jaeger from the past. Together, they stand as mankind’s last hope against the mounting apocalypse.
Oscar® nominee Guillermo del Toro (“Pan’s Labyrinth”) directed the epic sci-fi action adventure from a script by Travis Beacham (“Clash of the Titans”) and del Toro, story by Beacham. Thomas Tull, Jon Jashni, Guillermo del Toro and Mary Parent produced the film, with Callum Greene serving as executive producer.
“PACIFIC RIM” stars Charlie Hunnam (TV’s “Sons of Anarchy”), Idris Elba (“Thor”), Rinko Kikuchi (“Babel”), Charlie Day (“Horrible Bosses”), Rob Kazinsky, Max Martini, Clifton Collins, Jr., Burn Gorman, and Ron Perlman (the “Hellboy” films).
Del Toro’s behind-the-scenes team included Academy Award®-winning director of photography Guillermo Navarro (“Pan’s Labyrinth”), production designers Andrew Neskoromny and Carol Spier, editors Peter Amundson and John Gilroy, and costume designer Kate Hawley. The music is composed by Ramin Djawadi. The visual effects supervisors were John Knoll and James E. Price, and Hal Hickel was the animation supervisor.
Warner Bros. Pictures and Legendary Pictures present a Legendary Pictures/DDY Production, a Guillermo del Toro film. Opening July 12, 2013, the film will be released in 2D and 3D in select theaters and IMAX®, and will be distributed worldwide by Warner Bros. Pictures, a Warner Bros. Entertainment Company.
This film has been rated PG-13 for sequences of intense
sci-fi action and violence throughout, and brief language.