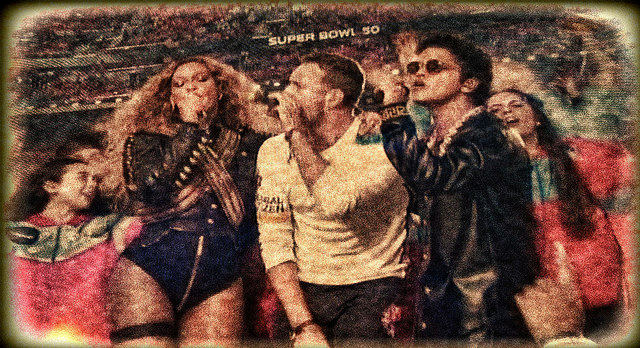 Beyoncé slaaaaaaayed at the Super Bowl this year. Her fierce performance comes on the heels of the release of her latest single and video, “Formation,” an homage to black female power, as well as to her Southern roots. Now, she didn’t even perform the entire song at the Super Bowl, and yet people are coming out of the woodwork to criticize her performance as “an attack,” talk about how she was “half nekkid” while making an unnecessary political statement, and calling her and her husband “cunts.”

.@OwenBenjamin deleted the tweets but here are a few. pic.twitter.com/MyAtx6DooL

Exhibit A: “Comedian” Owen Benjamin who tweeted some of the most vile and ignorant things in response to her “Formation” performance. Like the lovely gem above. Hey, Benjamin – not everyone has to Google the Black Panthers to know who they were and what they stood for, but perhaps you do. Equating the Black Panthers to the KKK shows such a fundamental lack of understanding about the basics of structural racism, I don’t even know where to begin. Needless to say, marginalized communities always have and always will disagree on their methods when fighting for a greater, common goal, as have groups of white people when fighting for freedom from oppression – Irish Republican Army, anyone? Um, the entire American Revolution? (Thanks, Hamilton!). And yet it’s only when People of Color are backed up against a wall and radicalized that it’s seen as hateful.

“Beyoncé is a billionaire married to a crack dealer who enjoyed selling whores. Maybe she should pump the brakes.”

Benjamin didn’t stop at racism. He managed to incorporate sexism, too, bringing up Jay-Z for no good reason, because we can’t talk about a woman without talking about who she’s dating or married to. Use of the word “cunts” is particularly charming. Then talking about Jay-Z’s past selling drugs in the present tense, so that we never forget that he was a Black Man Who Sold Drugs. Um, it’s no secret that Jay-Z sold drugs – he raps about it – but bringing it up now a propos of nothing (Seriously, what does any of this have to do with the “Foundation” performance that so upset you?) further cements the racism in Benjamin’s message. For the record, Jay-Z and Beyoncé are billionaires combined.

Here’s where Benjamin really shows his cluelessness. “Support cops criticize the system?” Um, THAT’S WHAT THIS IS ALL ABOUT. That’s all this has ever been about. The nod to the Black Panthers in her costuming was a reference to the fact that the system is indeed so broken that we need to remember the extreme measures that black people were pushed to in the 1960s, because they’re still relevant. The only reason she’s bringing up the Black Panthers is because the system is so racist that this Black Power imagery is something the black community still needs. Think about that. The only reason why Benjamin is so upset about this, is because he can tie her imagery, created in the 1960s, to actions, conversations, and incidents happening today (meaning that he, as a white person, is implicated).

And yet, despite the fact that unarmed black people are still getting killed by cops who still go unpunished in most cases, a subtle political statement from a black woman as part of a musical performance is seen as the equivalent of terrorism. Are you fucking kidding me?

Oh wait, no. THIS is the pinnacle of his cluelessness:

This isn’t about the fact that, as a white person you should stay silent. It’s about the fact that you should stay silent if all you have to say is racist and sexist shit. Believe it or not, there are plenty of white people who wake up every day and get it. They’re trying to be better allies. They’re listening when black people talk about what they’re going through. They’re supporting outspoken women of color. If more of you did that, we wouldn’t need to have this conversation! It’s not about “staying still,” it’s about ensuring that your movements don’t cause others harm. If you’re saying that white people can’t move without causing someone harm? Well, THAT’S THE PROBLEM RIGHT THERE, ISN’T IT?

The stupidity continued from the likes of former New York City mayor and current blowhard, Rudy Giuliani, who said she used her performance to “attack police officers.” Um, no – she used her performance to stand up for the lives of black people. If you see a connection with the police in that, maybe that’s where you should be looking instead of at the person complaining, hmmm? The idea of “The Good Cop” keeps coming up. And yet, it seems like there’s a shooting of an unarmed black man on the news every other day. How many “bad apples” need to kill unarmed black people before you start looking at the health of the damn tree?!

Oh, and then this Canadian dude got into it for no good reason. (Dude, we’re trying to solve problems in our country here. Shhh.)

And lastly, it saddens me to say, it isn’t just white men who are getting on the sexist and racist attacks on Queen Bey. Here we have Jesse Lee Peterson talking about what a “disgrace” she was at the Super Bowl. And of course, rather than remain content to express his opinion on the message behind her song, he has to make comments about what she’s wearing, talking about how her political statement is that much worse, because she is “half-nekkid.”

Bottom line: she would not be getting any of this backlash if she weren’t a black woman. Period.

The good news is that Beyoncé doesn’t need these people. She’s too busy basking in the glow of the fans who get it. I’m thrilled that she’s gotten more and more political with every album she’s put out the past few years, and I hope that continues. She’s more than just a sexy pop star – she’s an intelligent, talented woman with a point of view, and where else but through her music should she be expressing that? Get it, Beyoncé. We’re in formation behind you.