Overwatch Unveils a Brand New Hero, a Robot Built by a Genius Little Girl of Color 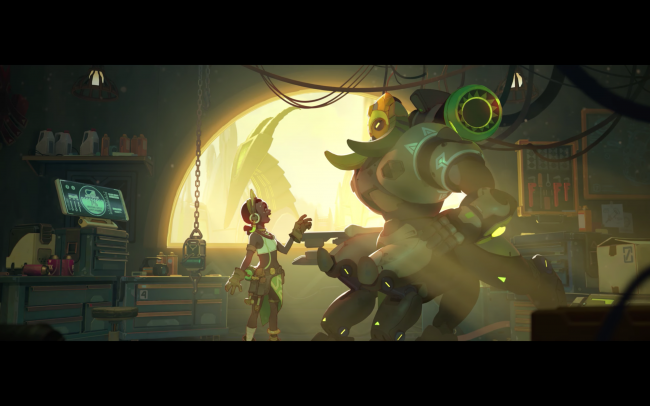 Overwatch continues to impress as today, they unveiled a brand new addition to their hero roster: Orisa. She’s an Omnic (i.e., robot) rebuilt from spare parts and scrap found at the Numbani Airport (a playable map and prominent location in Overwatch lore). In the game’s lore, her creator, Efi Oladele, is an 11-year-old genius whiz at robotics. What’s more, she’s a girl of color, continuing Overwatch‘s growing trend of promoting representation and visible equality in games.

The buildup to Orisa’s unveiling involved a lot of “in-universe” storytelling on the part of Blizzard, and rumors began wildly spreading about a possible new robot hero after a short magazine “interview” with Efi was posted online.

Orisa’s origin story is short, but it’s heartwarming. It’s narrated by Efi, and it carries a lot of echoes of Big Hero 6, to be completely honest with you. That’s not necessarily a bad thing, and Blizzard seems to have certainly made the story their own here.

For those of you who play Overwatch and are curious about her actual abilities, check it out: Orisa’s a Tank-class hero, and is described as a “central anchor of her team.” Her primary ability centers on the use of a shield that reduces incoming damage, whereas her secondary shields allies—she’s a bit like Zarya in these regards. As well, she has a “Halt!” attack that acts like Zarya’s graviton surge, which pulls enemies into a central location. Seems useful for disrupting entrenched and otherwise well-covered enemies.

It’s her ultimate, though, that bears some special mention: she can supercharge her allies, boosting their damage as long as they remain in line of sight with her.

On paper, she already seems like a fun hero, and will likely serve as an interesting mix-up option for folks tired of pulling down the same tank classes. Lord knows that the tank lineup needed a bit of a boost, as plenty of other hero archetypes have been getting a lot of love and attention as of late.

Oh, and it bears mentioning: dudes are ripping on Blizzard because this new hero happens to be female (or, at least she’s coded to be and gendered as such by all of the videos).

Man, it must suck to have to ask for representation, huh? I wouldn’t know what that’s like at all, nope, no siree-bob.