Winston Hosts Christmas Dinner With Tracer and Her Girlfriend (!) in Overwatch Holiday Comic

Yes, you read that right. Tracer has a girlfriend. IT'S CANON. 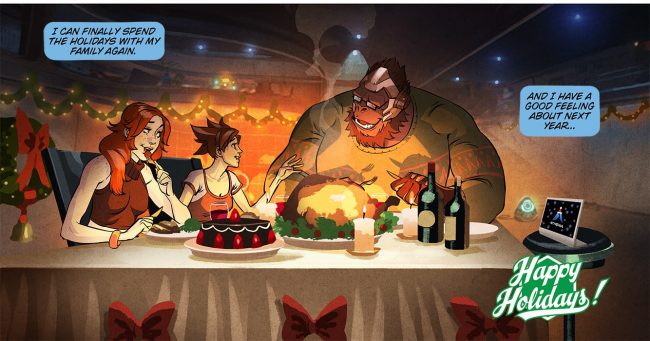 The big headline surrounding Overwatch‘s brand new holiday comic is going to be “Tracer is dating a woman!???” … and that’s understandable, given the fact that it’s sadly surprising to see Blizzard confirming a canonically queer character in Overwatch. But, also, in addition to that? It’s a mega-adorable holiday comic, and you should give the whole thing a read.

The comic won’t take you long to get through, since it’s only a few pages, but in case you don’t want to read an Overwatch comic while you’re at work (or wherever you may be), I’ll summarize it for you: It revolves around Winston planning a holiday dinner for his new surrogate family, meaning Tracer (awww). Tracer, meanwhile, is rushing around town to be sure she can make it to the party in time. After all, Winston doesn’t have any other family members to invite (sob!) so it’s very important that Tracer make it. But, of course, Tracer also had hoped to find time to buy a gift for her significant other, and she just can’t manage to fit all her chores into her day.

As Tracer runs around the shops, she keeps getting distracted by wanting to perform good deeds for others, and in all the hustle and bustle she doesn’t manage to get the gift she wanted to get for her sweetie. Just before Tracer heads to the subway to go home (since she’s out of teleporting juice), a kind family ensures she won’t go home empty-handed and hands her a mysterious wrapped gift. When she gets home, we learn that Tracer has a live-in girlfriend who is preparing mugs of hot cocoa for them both. Tracer’s girlfriend (who sadly doesn’t have a name given here) sees the gift and opens it before Tracer can say where it’s from. Surprise: it turns out to be the exact scarf Tracer wanted to get for her!

The two ladies put back on their coats and rush over to Winston’s holiday meal together. Even though they’re a bit late, he’s overjoyed to see them rather than spend the holidays alone. The final pages of the comic feature a series of panels showing us most of the rest of the Overwatch characters’ holiday season. We get to see a fun panel of Reaper sulking by himself in the rain, which has already become a bit of a meme. There’s a sad panel of Widowmaker visiting the gravesite of her late husband Gérard Lacroix. There’s also a panel of McCree and Sombra getting sloshed together at a bar. And a panel of Junkrat and Roadhog on a road trip together to some sort of amusement park located in a much warmer climate (there are some palm trees in the background). The list goes on—and it’s all just so gosh darn adorable.

Of course, the main aspect of this comic that’s getting the most coverage online so far—including in this very article, because I can’t help it—is the fact that Tracer has a girlfriend. It’s not the focus of the story at all, and it’s treated normally, and the girlfriend character doesn’t even get a name (which is actually a little disappointing), but it’s still a big deal and I can’t help but focus on that aspect, simply because it’s important and special. The comic serves as a subtle way to let us know something about Tracer’s life, and since Tracer is one of the most-seen characters in the game—she’s in the tutorial, she’s on the front of the official game box, and so on—it’s pretty incredible to also have her be a queer character.

It’s also a very long time coming for Blizzard. I don’t want to run through the company’s entire history here, but suffice it to say that they’ve put out many games that I wouldn’t consider to be bastions of storytelling or particularly good depictions of women characters (*cough* StarCraft II). Blizzard had said previously that there was exactly one gay character in Overwatch, but they never revealed who it was. Honestly, I didn’t expect them to ever bother to reveal it, given their track record.

So, I’m pleasantly surprised to see the reveal happen in a cute comic that also has a lot of other great moments, and I’m also surprised that such a prominent character in the game’s marketing is the one who turned out to be “the one gay character”. What’s more, I’m not ashamed to admit that this comic made me misty-eyed and meant a lot to me.

That said, part of why I’m so happy is because I had set the bar so low for Blizzard here. And, honestly, I’d love to see them continue upward on this trajectory. I hope they don’t consider a 12-page holiday comic to be “checking a box” in some way when it comes to queer representation, and that going forward, they continue to tell stories like this about the characters in their other games.

It would also be great to see them incorporating this attitude into their games that are more narrative-oriented. Overwatch doesn’t have a campaign mode; its narrative elements happen entirely outside the scope of the game, in comics and animated shorts. Because of that, many fans might not ever see this or realize it’s part of the game at all. I’m still hopeful that Blizzard will soon move forward to including stories like this one in their games, as well as in the additional content surrounding their games, like this comic.