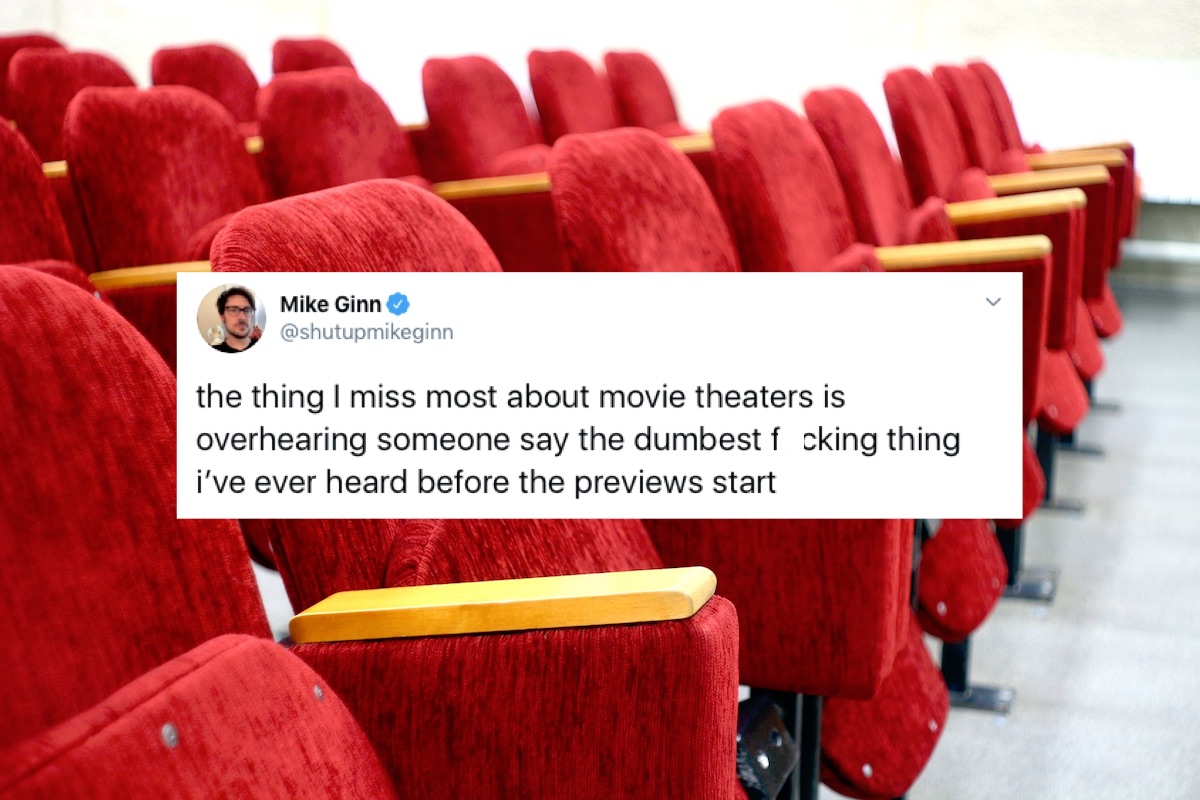 Writer Mike Ginn probably didn’t expect for his tweet about how he missed overhearing inane comments in movie theaters to go wildly viral, but it’s at 300k+ likes and counting. Ginn’s feelings on the matter are relatable because this appears to be something a great many of us have experienced—and the thread just kept getting better and better as people in the replies shared their most memorable “overheard” moments. This thread made me laugh, which is something we’re sorely in need of these days, so let’s dive in.

The thing is that loud commentary in movie theaters isn’t limited to pre-previews, or the previews, though those can often provoke a vocal audience reaction. Some people ask questions and exclaim throughout the movie, and of course kids are often a goldmine.

The thread called for the dumbest things said in movies, not the most brilliant

One time I went to the movies and a Toy Story 4 trailer started and this kid behind me said “toy story FART” and it was the funniest thing I’d ever heard.

Sometimes—the best of times—movie theater commentary can become a team sport that the rest of the audience appreciates. Reactions can induce hilarity, or else there’s a special camaraderie to hearing and sharing everyone else’s excitement, shock, and overall emotion.

This is the best theater experience I could possibly imagine

Oh my God the shade, I’m fucking cackling. This really is the shit that makes watching movies in theaters so great.

But all too often, it appears that moviegoers are watching a film that they knew next to nothing about going in?

I went to see 127 hours at the cinema. Part way through a lady in the row behind me said “I hope he’s not going to be stuck behind that rock for the whole film”.

I’ll never forget leaving Spider-Man 3 and overhearing a woman say to her date, “It was okay, I just didn’t know what it was gonna be about.”

i watched Midsommer on a date and i had to explain to the guy what was happening in the opening scene. many questions followed the entire movie. i did not go back to his place.

I miss people who have to have a friend narrate the movie for them, like they’re blind or something.
(70 minutes into “John Wick”)
“Who’s this guy?”
“That’s Keanu Reeves. He plays John Wick.”
“Oh. Why’s he killing all those guys?”
“They stole his car and killed his dog.”
“Wow.”

When I saw Bohemian Rhapsody, two dudes in the theatre were loudly shocked to see men kiss each other on screen. They let out a burst of noise and one said, “I guess it was the ’70s!”

At the end of The Great Gatsby, the words “Based on the novel by F. Scott Fitzgerald” flashed onscreen.

Guy in front of me turns to his wife and goes “Ohhh. It was a novel!”

I was 3/4 of the way through Benjamin Button when a guy behind me said to his wife, “he’s gettin younger!”

What an awesome journey that guy got to go on.

Then there are the reactions that are just truly head-scratching.

I’ll never forget the trailer for Antz when some girl asked the guy she was with “Did you ever see Ant 1?”

Went to see Paul with a friend in 2011 and right before it started someone behind us asked whoever they were with, “did you know this movie has computer animation?” pic.twitter.com/az2CThnMZB

Dude in the post-credit scene of the first Avengers movie screamed “Hellboy’s Back!” when they showed Thanos. To this day I don’t know if he was serious.

Time and time again, I’ve sat through a preview for a movie that looks mind-meltingly bad, but the folks around me … really love it? At least I’m not alone:

OMG yes this is what winds me up, when you see a preview and you’re like “You couldn’t PAY me to sit through that movie” and people around you are like “hahaha looks great we should go next week” and I just worry about the human race

We can too easily get into a place of knee-jerk cynicism, however, and it can be great to witness someone’s more wide-eyed experience at the movies.

At the start of Aquaman the WB logo with water over it. The guy next to me turns to his date and says “ooooooh, because its Aquaman”

Then there are the people whose takes were decidedly less cute.

Saw a preview of Gretel & Hansel on a date. Date said very loudly “Hollywood is so weird! What director comes up with making a house out of candy!” “It’s from the fairy tale.” “Uhh no they would never make a kids story about cannibalism. You’re f****d in the head.”

When I went to go watch A Quiet Place, the couple a few seats down from me left angerliy 10 mins into the movie because it was too quiet. pic.twitter.com/U49XK8TzZU

I still remember seeing Kung Fu Hustle in theaters and 20 minutes into the movie 2 rednecks stood up and said out loud “We didn’t come to a theater in AMERICA to have to read!” Everyone stared at them as they left and we all laughed at them afterwards.

Quite possibly my favorite commentary of all.

My friend and I saw the Johnny Depp Charlie and the Chocolate Factory, and when Charlie pulls out the golden ticket, this guy in the row in front of us leans to his wife and says “bingo.” Missed the next ten min of the film bc we were stifling laughter

And sometimes, the person overheard reacting is you.

I was drunk when I saw Brokeback Mountain in the theater. When Heath & Jake see each other for the first time on screen, it was really quiet with sexual tension until I loudly said “MMM-HMM!”
Everyone in the audience burst out laughing because they were thinking it too! 😂

Whether you’re annoyed by talking during films or the one doing the talking, going to the movies is a collective activity, and that’s what we’re really missing most. Be sure to check out the whole thread for many more fantastic replies. This may be our most common shared experience as a people.