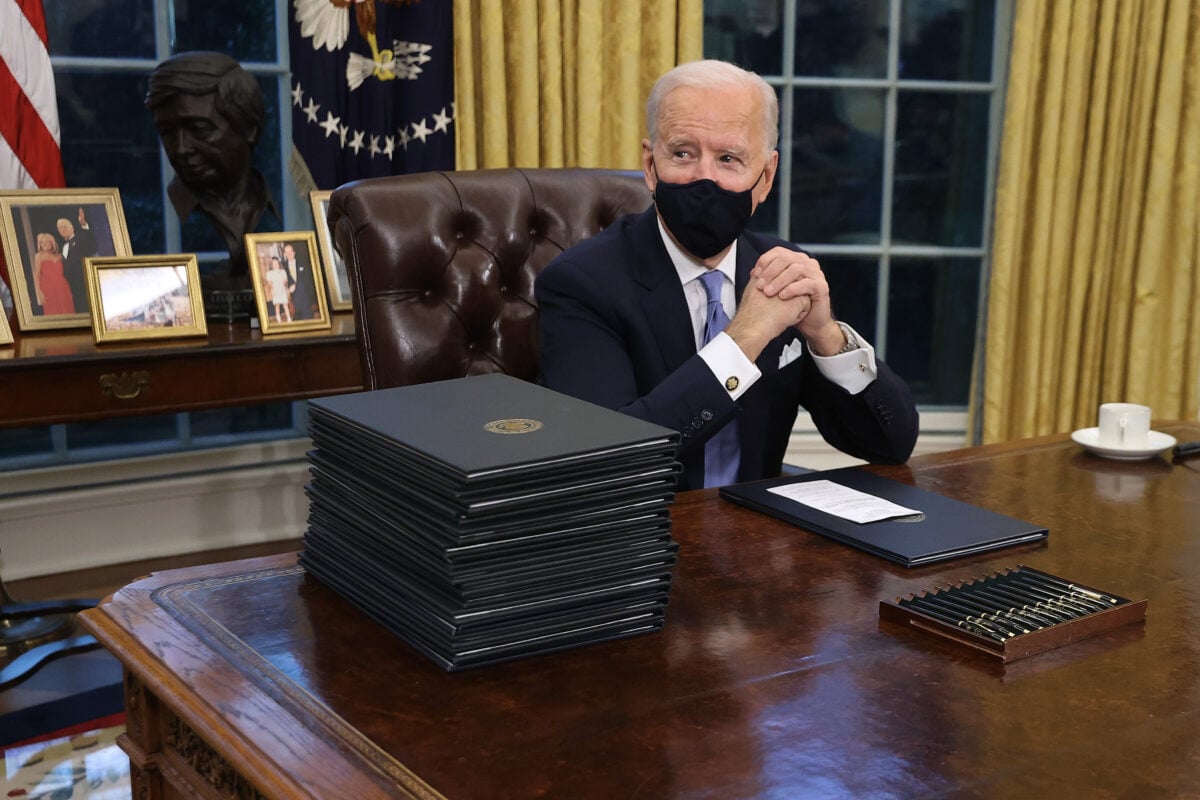 Joe Biden got to work immediately yesterday, taking a seat in the oval office to sign a flurry of executive orders which will start to roll back some of the most harmful policies of the Trump administration. We’re already back in the World Health Organization and the Paris Climate Agreement; the Muslim ban is gone and Biden has launched a sweeping initiative to protect LGBTQ+ workers. But other changes happened yesterday too and they were far more tangible: Biden changed the art in the Oval Office to make a big statement.

It’s tradition for every President to decorate the Oval Office to reflect their taste and how they wish to govern. Unsurprisingly, Donald Trump placed emphasis in his decor on statues and portraits with racist undertones, most famously, a portrait of Andrew Jackson to the left of the desk. Also present in Trump’s Oval Office on the other side of the desk was a portrait of  Thomas Jefferson. Trump’s Oval Office boasted a bust of Winston Churchill (Trump no doubt imagined he was tougher than Churchill) as well as a famous statue called the Bronco Buster which represented the American domination of the West. It was not, as Trump thought, a statue of Teddy Roosevelt.

Now, Andrew Jackson was the terrible racist jerk who brought about the Trail of Tears, and he, along with all those symbols of conquering the West, including slave owner Thomas Jefferson, gave the Trump Oval Office that white supremacist je ne sais quoi. Biden’s Oval Office is very different.

The Jackson portrait has been replaced by a portrait of Benjamin Franklin, meant to show Biden’s commitment to science. Also close to that are some actual moon rocks, which are, according to The Washington Post when they got a tour, are “intended to remind Americans of the ambition and accomplishments of earlier generations.” But that’s also just cool. Imagine moving into a new office and telling someone “yes, I’d like the moon rocks on display please.”

Jefferson has been replaced by “Avenue in the Rain.” The 1917 impressionist work will be familiar to those with keen eyes, as it also hung in the Oval Office when Clinton and Obama occupied it. Thomas Jefferson is still around though, he’s simply sharing space. Across from the desk, Biden has installed a large portrait of Franklin Roosevelt, flanked by portraits of Washington, Lincoln, Jefferson, and Alexander Hamilton.

Biden has ditched the Churchill bust and Bronco Buster for a collection of statues and busts that reflect his commitment to civil rights, diversity, and justice: Rev. Martin Luther King Jr., Robert F. Kennedy, Rosa Parks, and Eleanor Roosevelt. Additionally, there is “sculpture depicting a horse and rider by Allan Houser of the Chiricahua Apache tribe that once belonged to the late Sen. Daniel K. Inouye (D-Hawaii) — the first Japanese American elected to both houses of Congress.” Behind the desk, amidst photos of his family, sits a bust of labor leader Cesar Chavez.

One thing that hasn’t changed is the desk. The Resolute desk, as all fans of National Treasure will remember, was a gift from Queen Victoria to President Rutherford Hayes in 1880, made from the timber of a salvaged ship which the US had returned to Britain. The desk was used by many presidents, including FDR, who requested that a front panel be installed and to add a hidden safe. It was JFK who first placed it in the Oval Office. After a stint in the Smithsonian, the Resolute desk has served every President since Jimmy Carter, though for most of George H.W. Bush’s term it was in his private office.

But there have been other modifications to the desk. One such addition made by Trump, flummoxed reporters: his Diet Coke button. It has now been removed.

President Biden has removed the Diet Coke button. When @ShippersUnbound and I interviewed Donald Trump in 2019, we became fascinated by what the little red button did. Eventually Trump pressed it, and a butler swiftly brought in a Diet Coke on a silver platter. It’s gone now. pic.twitter.com/rFzhPaHYjk