Review: Slow-Simmering Season 2 of Outlander May Be More Intriguing Than the Last 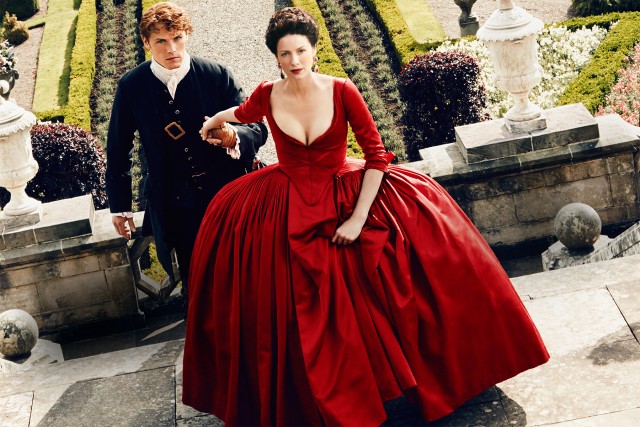 **This is a review of the first part of season 2. There are spoilers from season 1 and episode 1 of season 2, which aired Saturday.**

Saturday night, Book 2 of Outlander, AKA Season 2 (Season 3 some places because of the wonky Vol 1 and 2 of season 1), returned to Starz for its 13-episode run. The series, based on Diana Gabaldon’s extremely popular books, has a pretty devoted fandom, which I saw in full force at the New York premiere screening, including several cosplayers. The fans of this show (and the books) LOVE it, and yet, I also know a lot of people who aren’t watching it and a lot of people who tell me they won’t watch it because of what they’ve heard about it.

But if you’ve been curious, know this: It’s completely weird—but in a good way. When I tried to explain the series to my mother earlier this week, the reaction was utter confusion from her and feeling a little light-headed myself. Telling someone a show is a romance/fantasy/semi-sci-fi period drama set in the 1940s and 18th Century about Claire (Caitriona Balfe), a WWII nurse who goes 200 years back in the past to the Highlands of Scotland is a … unique experience. The show’s very description elicits strong reactions.

Before addressing season 2, I think I need to also address something the series overall has been both praised and criticized for: its depiction of sexual violence. This is a show with a considerable amount of sexual violence woven into its storyline (and has been since the beginning). Considering how ubiquitous that kind of violence is in media, it’s worth considering how Outlander‘s depiction of rape does and doesn’t differ from the narratives we often see on TV [Editor’s Note: that’s something Carly also addressed in-depth in her review of Season 1].

Having seen the first season and part of the second season (the first 5 of 13), here’s the opinion I (personally) have come to: Early on in the show’s run, I think they went a little overboard with the sexual violence, almost as if declaring what the audience can expect from the series. It wasn’t a question of the historical accuracy regarding the frequency of rape in the 18th Century, but of how it was shown and then subsequently addressed in the early run. I think the producers took note of some of the criticism, and while it is still very common on the show, they’re focusing on the emotional impact this violent act has on their characters.

While not a major part of season 2’s first episode, Jamie’s (Sam Heughan) rape at the hands of Col. Jack Randall (Tobias Menzies) becomes an increasingly important part of the season, as will another victim’s story parallel to Jamie’s. How sad to write that after all this talk about seeing and focusing on the human repercussions of sexual violence, I’m impressed to see a show finally address the subject from a serious and sympathetic perspective. It’s particularly impressive to see a show focus on male rape, in a way that A. doesn’t treat male rape as a joke, and B. is primarily a recovery narrative focused on the experience of the survivor. Honestly, the writing of these scenes isn’t always perfect (there is a questionable dream sequence), but there are several moments this season that pack an emotional punch.

But the show isn’t just about this one, albeit often overwhelming topic, and the great thing about Outlander is the way it’s been splintering out to become more and more complicated in the way it explores repercussions of one event or decision on the characters. I call the show semi-sci-fi because they offer no scientific reason for Claire’s ability to time travel, but time travel is more a convention of sci-fi than fantasy, especially the way they are addressing it this season. Claire’s gone into the past and is adamant about changing things, specifically preventing the Jacobite Uprising in Scotland, and Jamie, a Highland warrior through and through, has agreed to do this with her for the “greater good” of his people. But that means infiltrating and posing as someone he isn’t (something he could never do in season 1) and interacting and playing with potential enemies. 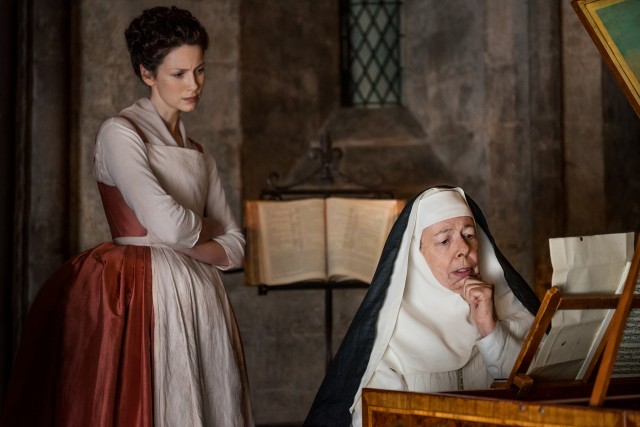 The show has left Scotland and taken the beloved couple to pre-revolutionary France, which means less battles and more politics—and by less fighting, I mean a lot less fighting … and a lot less sex this season, too. The pacing this season is arguably a lot slower and more methodical than the last one, which felt plot-heavy and dense, even with 16 episodes. Season 2 seems to take more time with everything and adds far more nuance to the returning characters (and introduces the new ones slower). As with any TV couple, once our lovers are together and committed, keeping them together (and happily together) is a challenge, even for this show. They aren’t just the star-crossed lovers anymore; they are a political/economic/emotional partnership whose bond will be tested.

And the major tension this season brings everything back to the beginning (the reason I’m writing this season 2 review after the premiere). The show opens with Claire’s reunion with her husband Frank, the man she apparently loved (they were on a second honeymoon) when she traveled back in time. We followed Frank a bit in season 1, looking for Claire after her disappearance, and he is treated with far more empathy in the show than book. But episode 1 of this season, “Through a Glass Darkly,” actually shifts our expectations and asks us to question the authorial loyalty we have towards Jamie and Claire as the show’s “couple.” Despite his natural British reserve, Frank suffered two years over the disappearance of his beloved wife, but we were told in season one that Claire and Jamie are end-game, so we default to rationalizing Frank as a Nice Guy interloper rather than a victim.

But now Claire returns to Frank, suffering the same desperate loss of a loved one and trauma her husband experienced. Claire and Frank, a reserved but affectionate couple, may be far more alike than perhaps even Claire and Jamie, despite their heat and passion. Adding to this wrinkle, Claire’s return to Frank brings in a couple more elements that turn out to be far more intriguing than you may expect. For one, this offers audiences a look at a possible end game; is this a flash-forward to the end of season 2 or just a possible end to season 2? In the first episode flashback, we turn to Jamie and Claire getting off the boat in France, but she’s returned to Frank in Scottish clothing and still pregnant. Logically, we can assume Claire and Jamie go back to Scotland, unable to stop the Jacobite Uprising … but why and whether or not that’s certain is still unknown.

Also, thematically, Frank (and Col. Randall) hang over them as a couple far more than they did last season. Frank was essentially absent from the second half of season 1 and rarely mentioned by Claire. Col. Randall was of course the Big Bad of season 1, but Claire rarely seemed to notice how those two men would impact her marriage to Jamie (which did frustrate the hell out of me). Now, she’s connecting the dots, and that’s thrown everything off. Frank is the direct ancestor of Col. Randall, but Col. Randall is the enemy of Jamie. When Frank tells Claire the she has to forget about Jamie because they can’t live with his ghost, the show essentially proves why Claire’s plans to change thing in the past are far more complicated (even this season’s tagline is “Forget the Past, Change the Future”). To make the changes she wants for Scotland would mean essentially erasing Frank either from her own life or existence. Now Frank is the ghost Jamie and Claire, and the audience, have to live in the shadow of. Personally, I’d be totally fine if this show took a later-seasons Lost approach so we could get more Claire/Frank scenes to compare with Claire/Jamie scenes. I find the drastic difference pretty fascinating when side by side. 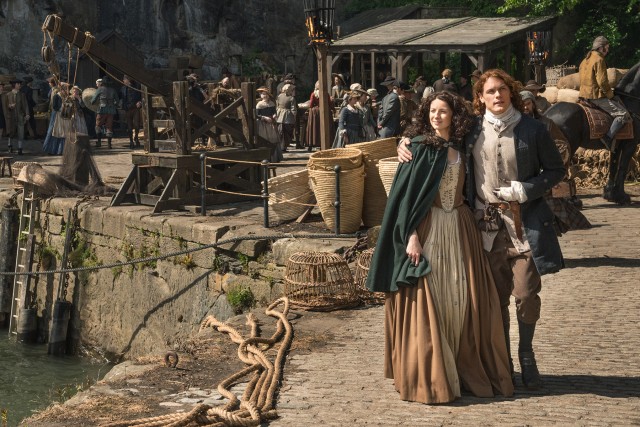 With the big changes to the location, most of the Scottish cast from season one has been replaced with new characters, including several directly from history, but we retained the core threesome, along with Duncan Lacroix returning as Murtagh, Jamie’s Godfather and friend. Sam Heughan was an extremely charismatic actor last season, but I think he’s improved considerably this season (especially later on) and finds more variations and levels to play as Jamie. Caitriona Balfe is still just fantastic as Claire, who finds plenty of depth and nuance in every scene. The consistency she has as Claire in all times and places, while adjusting to the demanding social conventions she finds herself in, adds so much. Claire is the same woman whether she’s in Scotland in the 1940s or 18th Century, the Highlands, or French Aristocracy. She makes small, subtle adjustments to things that simply show her awareness of her surroundings, and Tobias Menzies is basically on his way to becoming the next Alan Rickman. Considering how much I hated (HATED!!!) his character of Jack Randall last season, to re-introduce him as Frank Randall in the first episode and render audience affection so quickly is pretty remarkable. The two characters are so distinctly their own, without Menzies needing to put on any Grande performative artifice to separate them, is an acting tour de force. Balfe and Menzies were nominated last season for Golden Globes, and I wouldn’t be surprised to see them there next year, as well.

By the way, this show not winning all sorts of technical awards kind of blows my mind. The costume and set designs are alone are some of the best on TV, and this season looks even better than the last. The technical scope this season (the cinematography, music, costumes, sets are all top-notch) is what makes the show feel cinematic and epic, despite getting deeper into the subtle nuance of characters and relationships that can make other shows feel small. The clear understanding of using those aspects to make TV shows feel deeper and richer, while still being entertaining visual spectacles, is a talent Ronald D. Moore showed when he took Battlestar Galactica from a smart and kitschy show from the ’70s and turned it into one of the best series about war, the military, and terrorism ever (and brought TV one of the best female protagonists). I would argue that showrunner Moore has taken the same distinct approach to the material with Outlander, and considering what the show has accomplished so far, I’m pretty much committed to this weird, wonderful, time-traveling adventure until the end.