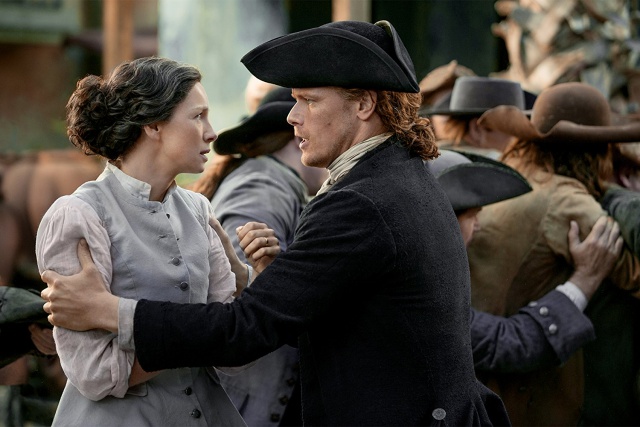 The ways in which this episode of Outlander made me cringe and rage were varied and immense. From the “tropical drum beat” added to the opening song, to the fact that it’s an episode filled with nameless black people, and that Claire ends up participating in slavery. Ugh, guys, you should have just stayed in Europe.

Many of the issues that plague Outlander are indicative of the source material and the time period in which it was written (the first book was published in 1991). While the show has done its best to counter some of the more obvious flaws, it has kept many of them simply due to how often and readily Outlander uses rape and sexual violence to move its narrative forward. That’s not to say that Outlander is a show without merit—it usually does a good job of discussing the inequalities facing women … when those women are nice to Claire.

I would not want to reduce Outlander to “just” a romance, because the series has never been about just the relationship, and to frame it such is reductive, however, it is focused around the goodness and well-being of two white, heterosexual characters in the 18th century. So when tackling an episode that deals with imperialism, colonization, and slavery, a Scotsman from the 18th Century and a British woman from the 20th Century maybe aren’t the best lenses for examining this narrative.

When Claire and Jamie arrive in Jamaica to rescue Young Ian, Clare is deeply appalled by the slave trade and branding that takes place, being a more “modern” woman and having a black friend from her own time period. The scenes at the auction block are horrible, with Claire coming across a young man being auctioned off for breeding purposes. When the potential owners want to be assured of his virility and begin molesting the man in order for him to get an erection, Claire attacks the slave trader. It’s a powerful scene, which is undermined by the fact that when Claire asks Jamie to help the man, Jamie buys him in Claire’s name.

Mind you, by this point in the episode, it’s almost 20 minutes in, and the only spoken word by a black character has been “sit.” Not a great start. Claire isn’t happy about her name now being attached to the ownership of another human being, Temeraire. Claire says they need to free him, but Jamie explains that, for the time being, they need to keep him as their slave because at least they will treat him well. They need the bill of sale to prove he belongs to them. Jamie also decides to use Temeraire in order to find out information about where Ian is.

So, they (well really Claire) are appalled by slavery, they buy a slave to free him, but they don’t free him yet, and instead use him for their own purposes. They tell Temeraire that they absolutely, definitely, pinky-promise will free him when they find a safe place to do so. And every single black person watching this show all let out a laugh. Thankfully, at the end of the episode, Temerarie says there are free/escaped black people on the Island (because Duh, Claire) and he leaves after helping the duo. Thanks for the white savior fast-track taxi service to freedom. Bless your hearts.

As I watched the episode, a part of me couldn’t help but think, Why is this even happening? Jamaica ends up being a fancy “exotic” backdrop for the Frasers to dress up and go to a ball, free one slave, and pimp out their one Asian companion as an exotic distraction for their plans. None of this is good writing or well thought out. A lot of this happened in the books, and watching it on television makes it more vulgar.

I’m reminded of the Hulu show Harlots, which managed to tell really great empowering stories about poor sex workers in London that had diversity, a well thought out storyline about slavery, and managed to integrate it all without giving the idea that telling a story about women’s struggles only means white women. That’s the problem with Outlander; it wants to tell this really important story, but it’s not about any of that. It’s about Claire and Jamie. Sorry, but you can’t frame your narrative that deals with slavery and imperialism around two white characters who are benefiting from those very things for the entire episode.

Now I can hear it already: “Why are you judging these characters, who are from the past, by 2017 standards?” Well sorry, guys, but I’m not. I’m judging based on what the narrative is telling me. Claire is the one who caused a whole fit at the slave market, called the whole slavery system primitive, but still walked out with a slave. Jamie doesn’t really care, but Jamie is also the worst, so who cares? Claire is the one who is indignant about the whole thing, then goes along with Jamie’s whole “he wouldn’t be free anywhere” nonsense. Claire, you lived in Boston. You know there are free populations of Negros in the Americas. Yes, slavery doesn’t end for 100 years, but free blacks are a thing. There are also free blacks in many other parts of the world at this time. The fact that when Jamie lays all this bullshit mansplaining on her doorstep, Claire doesn’t go, “I’m from the future STFU,” is a fail for me.

The moral of the story is “don’t tell stories about these big topics if you can’t do it well.” And by “well,” I don’t mean create a post-racial utopia. I mean have the ability to give that story its own weight and importance beyond what it does for your two white leads. I mean the very least you can do is not make Jamie and Claire white saviors. At the very least. But that isn’t possible because they are the people this story is about.

So instead they use their token Asian and black “companions” as a means to an end, proving that all of Claire’s talk is just that: talk. And I’m left asking the question again, “Why are we even in Jamaica?” To go to a damn ball?