Our Obsession With Collector's Editions 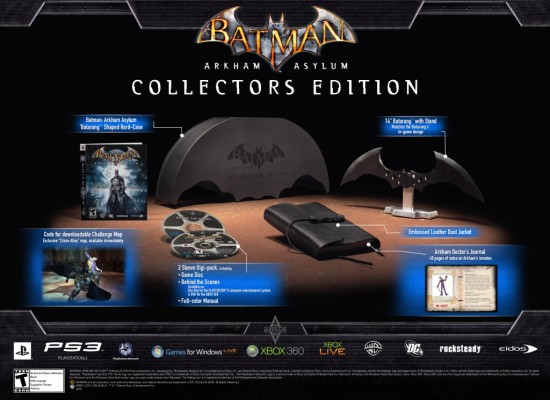 In addition to owning my fair share of games that I’ve never once played, a great many of the games that I own are also the special or collector’s edition. Owning them in some kind of limited format hasn’t particularly made me any more likely to play them, but it sure does take up a lot of space. In fact, often enough, I’ll buy the collector’s edition for games that I would never have bought otherwise. (Record of Agarest War Zero, I am looking at you.)

So, why is it that we, as gamers, are so entranced by the words special, collector’s and limited that those in charge of making them keep producing them? Obviously, enough of these are being purchased to keep making them financially viable for companies to come out with or we’d see a distinct petering out of such things. The moment they slap on that little sticker and add in a few trinkets, people line up to get their copy.

But as we move further into the age of digital distribution, more and more often the things that were once limited or saved specifically for the special editions of games come as download vouchers. Suddenly, some of those goods you paid to have come with your game exist only as lines of code on your platform of choice. Recently, inFAMOUS 2’s Hero Edition came with exactly this kind of voucher. The problem here is that these things never last for long; it will eventually be released as paid DLC if it hasn’t already.

Beyond the fact that some of those things that once made the special editions worthwhile are now available as downloads, the few physical things are often trinkets or knickknacks at best. Do you really need the Plasma Cutter replica from the Dead Space 2 CE or a bust of the protagonist’s head like with The Witcher 2: Assassins of Kings CE? Does anyone, anywhere, need an almost 9” statue of Cole McGrath? The answer to all of these questions and more is: no, not really.

And yet, I and many others continue to pick them up. This is partly due to the perception of limited editions actually being limited. If there are only so many to go around, the desire to own a truly limited product is pure economics and psychology. This is more often than not just a matter of perception and marketing, unfortunately. Regardless of whether it’s marked limited, special, collector’s or whatever they want to call it, production seems to typically continue in much the same way as the standard edition.

So, in summation, though we continue to buy them, special editions are increasingly being packed with digital goods that will be offered later, physical items that are worthless or should never see the light of day and often as not will keep being produced as long as the standard edition is being pumped into the market. So, why do we keep buying them?

One possibility is that we’re all a bunch of suckers. Another possibility is the fact that there is the rare special edition of a game that is actually worth purchasing for one reason or another. For example, while I may never use the large statue of Noble Team for anything other than box filler, the journal that came with the massive Legendary edition of Halo: Reach is chock-full of little tidbits and goodies for the longtime Halo fans out there. The fact that it also came with the special edition just below Legendary is even better. Then again, some people just like having the big, special editions of things to say they have it; more stuff for the sake of having more stuff.

For some, however, it can be as simple as a show of affection and respect for the work put in by those developers that they admire. If you want more games like The Witcher 2: Assassins of Kings or BioShock 2, it only makes sense to purchase more of what they’re offering. That’s why I bought Dragon Age: Origins a total of four times.