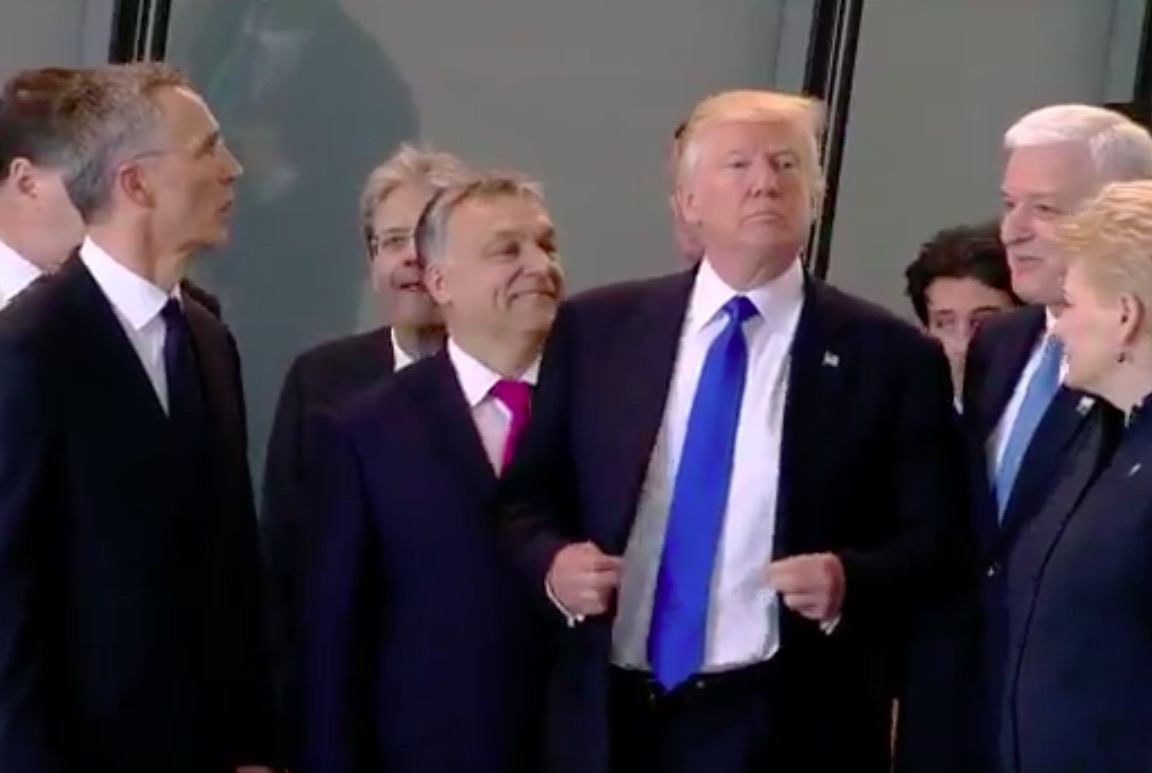 While an investigation continues at home—despite how many times Republican lawmakers try to make the point there’s no concrete evidence to talk about in an investigation that isn’t finished yet—Donald Trump is still enjoying some time abroad. Well, “enjoying” might be a strong word, judging by all the ridiculous things we’ve seen from him just today.

First, there was his reportedly epic handshake with new French President Emmanuel Macron, and I will forever live for Trump’s face, body language, and sad crushed knuckles in these pictures:

It doesn’t look so bad when you watch it on video on a tiny computer screen, but a press pool report from The Washington Post maintained that it was very intense: “They shook hands for an extended period of time. Each president gripped the other’s hand with considerable intensity, their knuckles turning white and their jaws clenching and faces tightening.” Basically, it was the world leader equivalent of this:

And it looks like Trump came away on the losing end. We all know how Trump hates losing, though, and he was sure to tell Macron that he’d been on his side in the French election all along (“you were my guy”), despite the fact that he was clearly hinting that he was in opponent Marine Le Pen’s corner prior to election day. If that’s not childish enough for you, here he is literally pushing aside the Prime Minister of Montenegro, Duško Markovic, to stand at the front of a crowd:

America First™ — Trump moves aside a NATO leader to make his way to the front of the packpic.twitter.com/zIwkFU9zBI

Here, we fixed the audio of this whiny playground bully for you:

Then, he gave a speech about NATO and again talked about other nations meeting their financial requirements, and this time he even correctly stated that the money was meant to be spent on their own defense measures! (Baby steps for a baby-man, I guess.) However, the world leaders in attendance still clearly weren’t into his blame game, and some whispered amongst themselves during his speech, which was for the unveiling of a 9/11 memorial at NATO’s new headquarters in Brussels.

He also tried his handshake nonsense with Macron again later on as Macron attempted to ignore him, and German Chancellor Angela Merkel slipped in a comment about how building walls won’t make us successful. Back home, Trump’s Muslim Ban has been defeated in court yet again for obviously being what it is, and the Trump team budget, which will hopefully be disregarded by Congress, is—you guessed it—an embarrassing disaster.

Whoever wrote this tweet should win a Pulitzer. pic.twitter.com/qfF0OGrYvm

The Congressional Budget Office’s prognosis for the GOP healthcare bill is also as terrible as expected. Just another Thursday under the Trump administration.