Our Fair City: A Refreshing, Witty Take on Dystopia | The Mary Sue

Our Fair City: A Refreshing, Witty Take on Dystopia

Don't worry, when the world ends the private insurance companies will be there to...take charge. 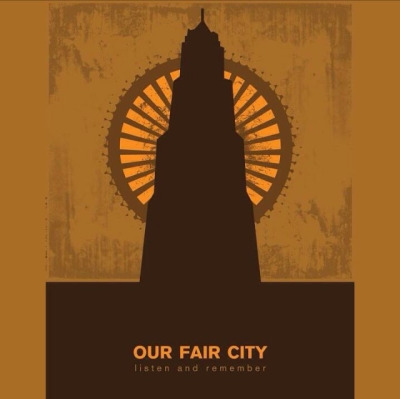 In the tunnels below and the singular monolithic tower looming above an icy, post-apocalyptic wasteland, the policies of Hartlife huddle close together and listen to recorded histories of the company’s glorious history. Such is the stage for Our Fair City, a serialized podcast created by veterans of the Chicago theatre scene and spanning, thus far, six completed seasons (of a planned eight).

Since I can already hear your mental cogs turning–a dystopian community presided over by a baritone radio announcer who paints over daily horrors with a sweet spin of propaganda sounds awfully familiar–I suppose I should start by saying that OFC actually predates Welcome to Night Vale by several months. And it isn’t just that, either: while the two podcasts share several surface similarities, they’re quite different on a thematic and structural level. OFC’s Narrator does have shades of characterization in later seasons, but his perspective isn’t an all-encompassing lens in the way Cecil Palmer’s is. Nor is it a current events broadcast.

Rather, we’re listening to a corporate spin on “historical events” that clearly chafe against that top layer of jingoist blubber. And the characters of these records are quite aware (or quickly become so) of the dystopian noose round their necks–something which adds a wholly different level of melancholy to the proceedings, knowing that these things have happened and Hartlife remains. And, presence of a certain visiting scientist aside, the supernatural events of OFC are rooted in sci-fi B-movies and steampunk (mole people engineered by “Dr. Moro,” lightning riggers bottling energy for the tunnels below) rather than conspiracy theories and Lovecraftian existentialism. A creature of a different genetic material, dear readers.

It is also, though it may have slipped beneath your radar before now, quite worth your attention. Like all serialized podcasts, it has its share of smoothing out to do in the beginning, but its concept is rock solid from the word “go” and the performances are likewise benefited by the cast of professionals. The show can be overwhelming for the first few seasons: the first in particular focuses on the passing around of a MacGuffin and throws a sizable cast of characters at the listener right off the bat (though I am happy to report that this sense of a fully formed world does make relistening quite satisfying); however, the first two seasons combined are only about as long as a feature film, and by the third season the writing has gelled into juggling a set of interlocking storylines centered around small groups that are easier to keep pace with as the cataclysmic event of the season unfolds.

At the same time, OFC is a character-driven story (mole people questioning their subhuman status, a woman who was revived from death and fights her cravings for flesh, an executive fallen from grace) with a central conflict that forces new dynamics into play and gives each season a structural backbone and a source of pacing. There’s a constant sense, as there is in all good ongoing stories, that it’s learning and growing as it goes along.

And as for the characters themselves, they’re a varied and intriguing lot. Often far from good people by virtue of their conditioned upbringing, a spark of humanity always manages to surface in a quiet or dire moment. Often for emotionally painful effect. It’s also nice to see a cast that’s quite near gender parity, and which also writes a solid spectrum of interesting roles for its female actors (it could use a little more diversity romantically speaking, but baby steps I suppose).

Outside of the main story there are also pseudo-canon live shows, which break away from the established cast to explore another element of Hartlife’s corporate or civilian structure. It’s a smart way to offer paid content without gating off important elements of the main story while also giving greater weight and reality to the established setting. While cliffhangers can be dire, it’s always its own kind of treat to take these detours. There are also graphic novels, but I’m afraid my investigative powers have not stretched that far for the moment, and I can tell you little beyond the fact that they exist and make occasional use of characters who are still alive but no longer part of the main narrative. Given what a struggle it can be to find funding in a medium that has roots in free distribution, I have the utmost respect for this balance of paid versus free content (and I am, in the interest of full disclosure, a contributor to the show’s Patreon).

But there is one point at which the series steps from “pretty good” to “an absolute must-listen,” which happens to coincide with the reason I investigated the show in the first place: it’s a running current-day series that makes prominent use of Herbert West as a character, and I went and left it out of my history of the character. Such a grievous oversight begged to be corrected, and along with it came…well, all the rest of that effusiveness up there. So, how is Herbert specifically?

Delightful, dear readers. Ever since 1985, Jeffrey Combs’ performance has cemented itself to just about every interpretation thereafter (though looking at Shoggoth on the Roof’s woeful usage of Herbert, I can hardly fault the change). So we get mostly blunt, monomaniacal manipulators with very deadpan senses of humor. Which is great but also an invention of the film in many ways, and one does like to see a bit of variety when they’re digging into adaptation twenty.

And here, to answer my prayers, OFC’s Herbert: a boisterous, friendly gentleman who could not be more enthused about new discoveries who simultaneously has exactly zero ethical compunctions about anything that could get in the way of science (pronounced SCIENCE!). The closest comparison would be Driscoll’s take on the character, but that Herbert is constrained and contextualized by the watchful eye of society, while this version is merrily running round in a dystopian post-apocalypse. Ryan Schile’s voice work is, on the surface, a parody of a parody of a Proper Gentleman–get in the nasal neighborhood of C3PO and then imagine the sort of person who would shout TALLYHO at top volume and you’re about there–but underneath there’s a rich texture to his performance that makes the character feel real across a solid range of emotions.

Even when he does the character-type bog standard of “creepy moment calls for dropping two octaves in pitch,” the moments feel germane to the world and Herbert as much as they’re for narrative effect. And he’s actually given a chance to have a character arc rather than being a nigh-force of nature for a token “normal” character to throw themselves against–even the films were rather guilty on that point.

If all that isn’t enough, there’s an unexpected hidden joy to checking out the show: it has, by far, the most engaged and thoughtful crew I’ve ever had the pleasure of observing. From regularly answering fan questions both silly and serious, to responding thoughtfully and openly to critique (that caveat up there about queer romance might be solved before the show’s eighth and final season, and I’ll take the confirmation of the body-swapping Herbert as genderfluid to my very happy grave), to writing content warnings for their shows once they realized there was a desire for them, the folks behind Our Fair City are the benchmark for how to engage with an audience.

If you do nothing else, you really owe yourself the treat of listening to “Herbert West vs. The Martians.” Award-winning, eerie, and hilarious, with just enough worldbuilding and hints of the story at large to pique the listener’s interest while still working as a standalone, it’s a short and superb way to dip in your toes.

Vrai is a queer author and pop culture blogger; you can pry canonically genderfluid Herbert from their cold, dead hands. You can read more essays and find out about their fiction at Fashionable Tinfoil Accessories, support their work via Patreon or PayPal, or remind them of the existence of Tweets.