Oscar Isaac Dances To Nearly Every Song You Can Think Of (Thanks, Twitter!)

I'll never look at this scene the same way again. 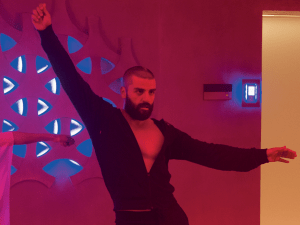 Ex Machina is a really strange, really powerful film–and even though there are some super-heavy scenes and powerhouse acting from the movie’s main trio of Domhnall Gleeson, Oscar Isaac and Alicia Vikander (hey, two out of three Star Wars actors!), there are also some very… interesting scenes as well.

Take the scene where Nathan (Isaac) and his assistant Kyoko (Sonoya Mizuno) break it down to a disco song while Caleb (Gleeson) watches on with what could only be described as an expression of confusion. We’re right there with you, Caleb.

Because the internet giveth as much as it taketh away, it was probably only a matter of time before someone got the idea to pair Oscar Isaac’s sweet Ex Machina dance moves with every other song available. Thanks to Twitter user @oscardances, you can now watch the Ex Machina dance scene mashed up with songs requested by fans. Here are a few of our favorites below:

Could this be a sign that Oscar Isaac needs to do a dance movie? Some of these songs definitely match up a little better than others, but you can be the judge of that.