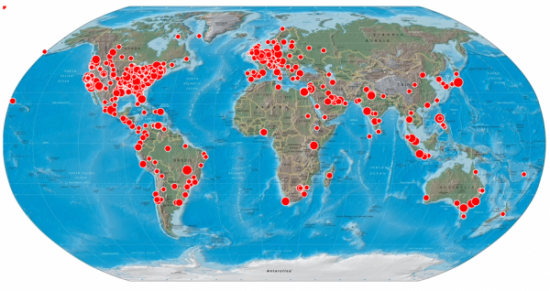 For those who were paying attention either last night or throughout the day today, President Obama delivered a speech declaring Osama Bin Laden dead. This news would have been even harder to avoid if venturing into the cat-filled depths of the Internet today, as — probably rightfully so — that is all anyone is talking about. Just how much is the news taking over the Internet, though, in this age of social media and phones that can write blog posts while the owner is getting in some cardio on the elliptical?

Social media monitoring firm Sysomos — true to their namesake — monitored the spread of the news throughout social media and found some interesting tidbits. The above picture shows the regional density of people who tweeted about the news. Obviously, the largest density of tweets came from the United States, though the map shows that the rest of the world also participated in the social media storm. Only twelve hours after the news first broke, Sysomos found that there were over 40,000 blog posts and news articles about Bin Laden’s death, as well as over 2.2 million tweets delivering the news in the limited-character arena. Twelve hours may seem like a long time to allow the world of social media to do its thing, but at midnight last night, not even an hour after the President delivered his speech, there were already over half a million tweets and nearly 2,000 blog posts and news articles released into the wild regarding the subject.

Sysomos also tracked the gender ratio of people tweeting about Bin Laden, and found that 63% of the tweets came from males, while 37% came from females. They also point out, which I experienced firsthand, that social media got ahold of and reported the story about an hour before President Obama made his speech last night, informing just about everyone I contacted of the news long before any official announcement was made.

We live in an age where social media is so deeply embedded in our every day lives, where — so long as we have service — our portable phones keep us connected with news and anyone else who happens to be connected. If our every day lives weren’t proof enough of social media’s strength and its grasp on our modern world, maybe half a million tweets and two thousand news articles reporting a momentous occasion in United States history an hour before the President of the United States addressed the world is proof enough.