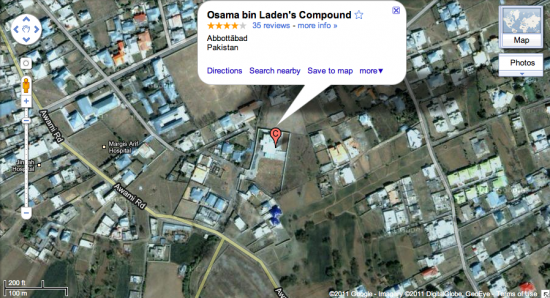 The Internet is a breeding ground for comedy, the subjects of which knows no bounds. Whether it be silly memes about drinking urine, or going so far as to create comedy within a maps and directions service, the Internet shall not be stopped. Momentous occasions in United States history are obviously not safe from Internet comedians, and less than 24 hours after President Obama went on live television to announce that Osama Bin Laden was killed and the U.S. had his body, Internet comedians began reviewing Osama Bin Laden’s compound on Google Maps, currently leaving the destination with four stars.

1. One Star: Free HBO, but “death to America! ” chants were getting old. Better options nearby.

2. One Star: Cold and drafty at night, walls full of holes.

3. Five Stars: Located in cozy, quiet neighborhood. Interrupted only occasionally by machine gun fire. Lacking in ameneties, but an up and coming area. Handyman special. One satellite phone available with smoking bullet hole for comms back home. CIA helicoptors offering complimentary air lift service for corpses. Great property to get away from it all. Must See!

4. Five Stars: I heard that this place is now available (prior residents left suddenly and unexpectedly).