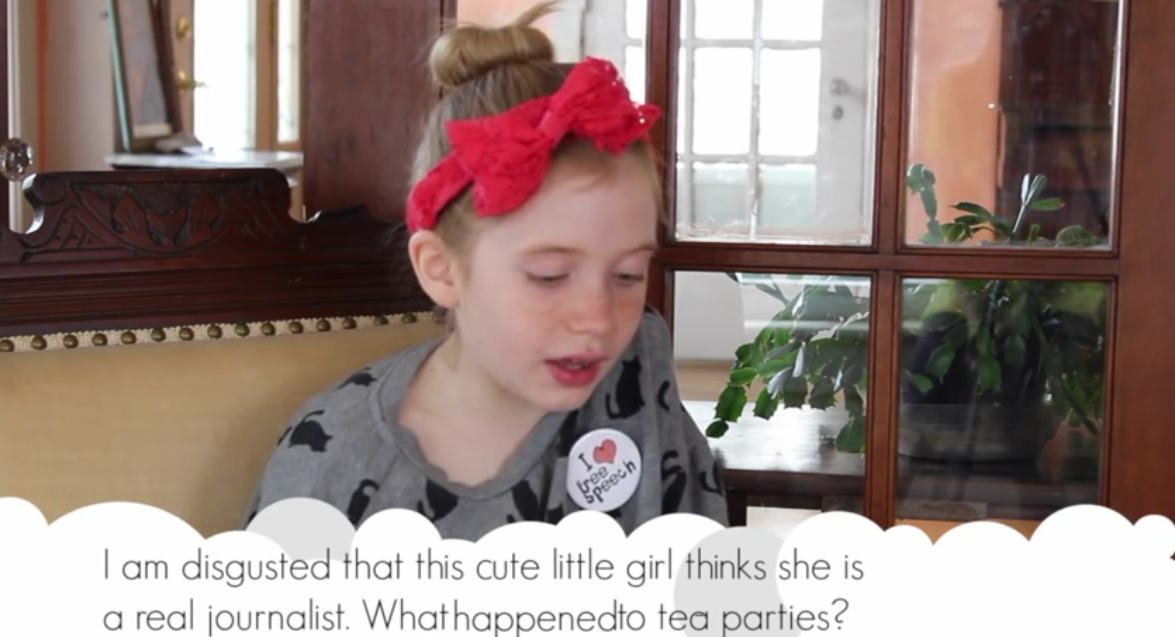 Nine-year-old Hilde Kate Lysiak is the sole journalist of Orange Street News, the only publication devoted exclusively to covering the events of Selinsgrove, Pennsylvania (population 5,000). Hilde’s favorite beat to report on is crime, and she’s written extensively about vandalism, drug use, and harassment in Selinsgrove. Regular Orange Street News readers know that Hilde often covers serious subject matter that might seem incongruous with her age, but when the nine-year-old was the first reporter on the scene of a murder in Selinsgrove last weekend, some local residents were scandalized.

Last Saturday afternoon, after hearing rumors that police had finally caught a Selinsgrove vandal she’s written about in the past, Hilde headed down to the police station to get confirmation. Instead, Hilde’s father says, the police chief told her “I’ve got a big story, I’ve gotta go.” Hilde consulted with a source she has in the town (the nine-year-old told The Washington Post “I got a good tip from a source and I was able to confirm it”), and learned the police were investigating a murder on Ninth Street, a few blocks from her house. The first reporter to arrive on the scene, Hilde talked to neighbors then went home to write up a breaking news item which her father, a former reporter for The Daily News, put on the Orange Street News for her. She then went back to Ninth Street and gathered enough information to publish a full story, a video, and photos on the site hours ahead of The Daily Item, a local paper which reports on Selinsgrove as well as the rest of Susquehanna Valley.

Hilde’s father described what happened that day for The Washington Post:

Because she’s the only one doing community news, she’s developed sources who trust her to cover the news. One of her sources contacted her, and she was able to confirm it with law enforcement. She knocked on every door, like she’d seen me do with the Daily News. There were no other reporters there.

In her full story on the tragedy, Hilde reported that officials were seen removing someone from the house on a stretcher, and that a man was “suspected of murdering his wife with a hammer.” Obviously, that’s incredibly upsetting news; and many readers reacted with shock to see a nine-year-old reporting a story of that magnitude.

On the Orange Street Facebook Saturday night, some readers praised Hilde’s work on the story; others debated a few specific aspects of how the coverage was written (whether or not Hilde should have included mention of the murder weapon, for example); and some criticized Hilde—and her parents—for Orange Street’s decision to cover the murder at all.

One commenter wrote, “9 year old girls should be playing with dolls, not trying to be reporters.” Another said “I think this is appalling that u would do a story like this when all the facts are not in yet.” Jezebel reports that the town’s former mayor even dismissed the article as “sensationalist trash.”

In a video edited by her 12-year-old sister Isabel (who writes an advice column for The Item), Hilde addressed the community’s concerns, ending by telling her critics: “If you want me to stop covering news, then you get off your computers and do something about the news. There, is that cute enough for you?”

Hilde told The Washington Post that she’s trying to ignore the people who think she should be spending her time at tea parties rather than crime scenes: “Because of my work, I was able to inform the people that there’s a terrible murder, hours before my competition even got to the scene. In fact some of the adult-run newspapers were reporting the wrong news, or no news at all.”

Although I understand adults who react with concern when they see a nine-year-old so involved with such an upsetting crime (I’m an adult myself, and my first reaction was also unease), some of the more patronizing responses to Hilde’s article really rankle me. Hilde takes the Orange Street News very seriously. That’s harmless and endearing when she’s writing about local skunks or posting about her sister’s accomplishments, but when she’s rigorously covering local crimes and other stories that could have a profound impact on lives, it’s harder for people to dismiss her efforts as “cute”—and that, coupled with concerns over her age and experience, makes some people uncomfortable. As some of her critics’ comments show, society is used to putting young girls in boxes, and we often don’t know how to react when they won’t comply.

Hilde seems to have filled an important niche in her hometown, and it also appears that she’s well-supported in terms of parental supervision. Part of growing up is recognizing the extent to which the world can be a terrible, violent, devastating place, and considering Hilde, like all of us, has to live in that world, it seems unfair to ask her not to honestly report on it, as well.