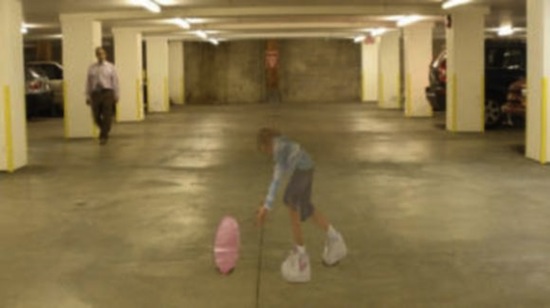 In Vancouver, the BCAA Traffic Safety Foundation and the safety group Preventable have teamed up and placed an optical illusion of a little girl chasing a ball down the street in an effort to curb reckless driving.

The reasoning behind the display, which costs roughly $15,000, as explained by David Dunn of the BCAA Traffic Safety Foundation:

“We need to expect the unexpected because anything could happen, whether it is a 3D image on the road … or whether it’s a live child or a dog running in front of the car, these are all things that we have to be able to control for in a vehicle”

A noble effort, sure, but fairly terrifying, especially considering the illusion looks like “an indistinguishable mark” from far away, then appears as the little girl chasing the ball within 30 meters. The people behind the idea don’t seem to see the problem with parading fake little girls across roads: it has the potential to cause as many safe drivers to fly off the road as it does reckless ones.

(Geek.com via The Globe and Mail)