Spoilers Galore: It's a Rogue One Open Thread | The Mary Sue

Get Ready for Spoilers and Stardust, It’s the Rogue One: A Star Wars Story Open Thread 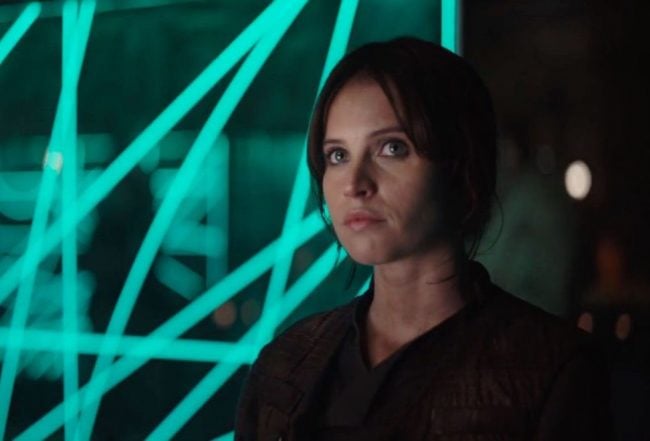 Did you see Rogue One: A Star Wars Story last night? So did I, and I’m so excited to hear what you thought about it. Come, join the spoilerific open thread so we can talk about the good, the bad, the CG.

Okay, is everybody gone? No one is here that didn’t see the movie? … Okay!

Here are some preliminary thoughts, on my part:

— I know the big complaint about this movie will be that although it had a female lead, it didn’t have that many other female characters. And that’s fair. But. I was pleasantly surprised by how much Mon Mothma got to do in this movie, in terms of being a leader and an older woman character, not to mention that she and our female lead do get to talk to each other multiple times… plus there’s Sharon Duncan-Brewster as Senator Pamlo, who Keisha gave a shout-out to in her glowing review. I wanted to see more of her, too, and in general I think this movie could have benefited from having more women background characters and soldiers (I only noticed two female fighter pilots, for example). In spite of that, I still liked all the female characters that we did have, few as they were, and I think this movie took some great strides by giving them interesting narrative actions and valuable decisions to make.

— Alan Tudyk’s comic relief robot character, K-2SO, is soooo great! And you all know I have high standards for robots. I would have loved to see him interacting with some of the other amazing robots that we know and love, but the narrative didn’t really call for that, so he got reduced to the humans’ sidekick. He was still amazing as heck, though. Plus: bonus cameo from R2 and 3PO.

— Speaking of cameos, that freakin’ CGI. I simultaneously feel like it all had to be there, but also, like it was incredibly distracting. The entire time CGI Peter Cushing was on screen, I kept thinking to myself, “WOW THAT IS CGI. WOW. THIS IS ALL CGI.” Which is the type of thing that you want your brain to not think, and instead immerse yourself in a movie while not being distracted, you know? But like. THAT CGI. I also think in a few years, we’re going to look back on this movie and really have a good giggle about the CGI in it, because it’s like, kinda good but also clearly still CGI.
Lastly, I don’t think we needed to see CGI-Leia at the end. It could’ve just been her hand taking the data, or something. Or just someone saying “Your highness,” but then we don’t see her. CGI Carrie Fisher felt too weird for me, plus she didn’t look like Carrie Fisher, which surprised me, because it doesn’t seem like that would be hard to do? CGI Peter Cushing looked way more like Peter Cushing than CGI Carrie Fisher looked like Carrie Fisher. Maybe they spent more time on him because he was in some many scenes? I dunno, y’all, the Leia part felt weird. But it was at the very end and I had just seen a movie that I really enjoyed, so I forgave it.

Okay, I’ll leave it there and let the rest of you opine about your favorite parts—and least favorite. What did you all think???