Once Upon a Time Mulan Sexuality | The Mary Sue

Once Upon a Time’s Jamie Chung On Mulan’s Sexuality, How They Just Need to Give Her a Plotline Already, Dammit 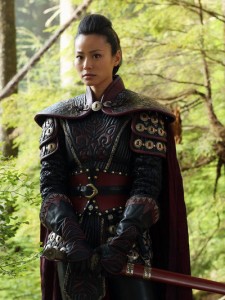 “It was like an on-going inside joke between [Aurora actress] Sarah Bolger and I. ‘I secretly, like, really care about you.’… The audience…there’s this conspiracy online, ‘Mulan loves Aurora!’ And I’m really glad the writers listened because I really think they planned that from the beginning. They’re all about twists and, like, why not, you know? It felt so natural to begin with.” — Look, I know the news about Once Upon a Time‘s Mulan being bi/gay/whatever/just in love with a woman isn’t exactly new; the episode where her feelings were confirmed came out months ago. But I’m still a little pleasantly shocked that Once, of all shows, went there (because Disney), so if Mulan actress Jamie Chung talks at a press junket for her new show Believe about how open Once‘s writers were to Mulan and Aurora’s obvious chemistry, well…  it’s too cool not to share, is what I’m saying. Chung also said that her new gig doesn’t necessarily mean Mulan is leaving the Onceverse for good: “I think it would be really disappointing to leave the audience with this giant question mark. I would go back in a heartbeat. I am committed to [Believe], but I don’t think that door is shut so I’m hoping there is something we can do to answer those questions… I would love more character development…something to sink my teeth into with that character.” Yes. Once, turn the camera away from the same old stories for once (Regina’s good! She’s evil! Good! Evil!) and focus on some of those excellent side characters you have for more than an episode at a time.