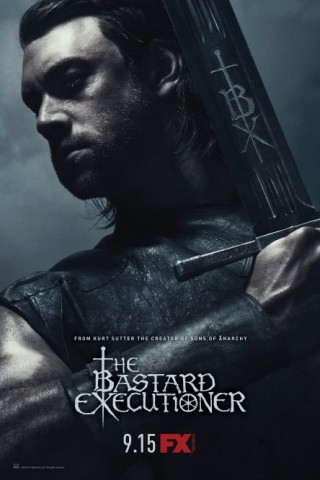 Let’s be clear about this as you digest the pilot episode: The Bastard Executioner isn’t about the Middle Ages.

First: The early fourteenth century in England and along the Welsh border was a thriving time. Populations were higher than they would be for nearly two hundred years, until Shakespeare’s day. To feed all those mouths fencerows were dug up, and marginal lands planted for whatever they would yield. Famine came, eventually, on the heels of some wet years. The Great Famine, as historians call it, pummeled the population decades before the more famous Black Death.

Second: The medieval Welsh and English cared about their law. Historians hotly debate medieval lawlessness but one could not simply destroy with impunity without being called onto the carpet for it. Edward I was a tough ruler, and a legal-minded one. (Edward II floundered, but his father’s law remained the law.) The Welsh marches were a transitional zone, to be sure, but not genuinely anarchic even in the turbulent years following Madog ap Llewelyn’s rebellion. No one, but no one, was encouraged to kill children or pregnant women. Shakespeare would not have cast Richard III as a villain if killing kids was par for the course in the medieval British Isles.

Third: Ye olde executioner isn’t really medieval. Did executions occur occasionally? Yes. Were they frequent? Goodness no. That same religion that brings Brattle back from war made medieval courts very very leery of sentencing felons to death: one did not take murder, even judicial murder, onto one’s soul lightly. In the early fourteenth century, such a sentence followed an indictment, and a jury’s decision. Even then one legally had the option of exile over execution. Executions were very rare.

Fourth: While we’re discussing judicial decisions, let us also recall that torture was simply not a part of the judicial process in medieval England. In the same period in which The Bastard Executioner occurs, the Order of the Knights Templar was taken down, but the Templars were extradited to France because no torturers could be found in England. Torture was a routine part of the legal process on the Continent, but it was notably absent from England and from English due process. The only legal form of torture in England was “pressing.”

Fifth: The only criminals who were tortured and executed horribly were traitors. A traitor, like a suspect not entering a plea, placed himself outside of English law. Therefore (according to the legal analysis of the time) English law could not protect him. Male traitors were hanged, drawn, and quartered (and if they were lucky died during hanging). Almost unheard of in the medieval period, female traitors were burned at the stake. Medieval England executed some traitors, but far fewer than our modern media would suggest. Are Brattle’s judicial victims traitors? Clearly that’s what the show wants us to believe, but the legal system remains notably absent.

Sixth: The witch. Oh the witch. Here’s the thing: magic use was common in medieval England. So were tattoos. Chaucer’s character John the Carpenter mutters a charm of protection in the Miller’s Tale. Gawain’s shield is covered with mystical protective designs in Sir Gawain and the Green Knight. Ordinary people visited healers who used a range of magic alongside herbal remedies. Noblepeople visited physicians who applied their remedies in strict adherence to astrological science.

Blood magic was not unknown to the Middle Ages, either. Arguably, blood magic was at work in religious penitential processions in parts of Spain during which men whipped their own backs until they bled. The idea was to stain the streets with blood that would be visible throughout the forty days of Lent. It was not “WTF.” It was normal.

Of course there was violence in medieval England. Of course some prisoners were treated abominably. Some people were executed. Some traitors died horribly and publicly. Colonization zones were (and are!) fraught places, and terrible things happened there. But even the Welsh border was part of a world where life was arguably more precious than it is today, because it was so very fragile.

Wales and England both were part of a world of green grass, where up to a third of women died in childbirth. They were part of a world where children slipped into ditches and drowned more frequently than they were spitted by evil men. There were no antibiotics in the Middle Ages, and so you might well die of a broken arm. Medieval people maintained joy and laughter and love and faith despite and because of these everyday tragedies. It is one thing to call Game of Thrones “medieval.” It is another to set a show firmly in a specific medieval time and place, and then baldly misrepresent both. Why must we “get medieval” on the very real, very ordinary pain and fear and hope of the people of that time?