On #Occupotty And The Privilege Of Passing | The Mary Sue

On #Occupotty And The Privilege Of Passing 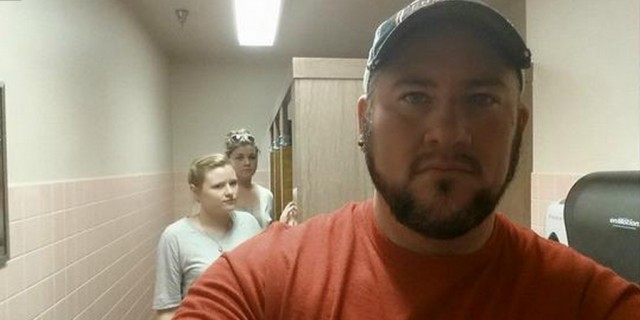 I’ve always been on the edge of acceptability. When I was young and pretending to be cisgender, I was bullied, and it pushed me into the world of computer and console gaming, where I could shut out a lot of the world. (Thank you ZX Spectrum 48k, your bouncy rubber keyboard helped me a lot.) Years later, me pretending to be cis went out the window. I was older when I started to transition; this is the standard pattern for transgender women – or at least it was.

The world of transition has changed, and thanks to easier access to information and more educated and accepting doctors, the age at which people transition is consistently trending downwards, most exceptionally in the case of trans women. This is good, as people get the support, care and treatment they need earlier in life. It will also, hopefully, help bring down the high suicide rate among trans youth and allow more people to be helped before puberty hits. Transition post-puberty is a lottery – and one I lost.

“Passing” is when you cannot be mistaken for anything other than the gender you are presenting as. A passing trans guy can go to the restroom and pee without hassle from cis men. A passing trans woman could do likewise without hassle from cis women. Yes, and just like that, we’re back to discussing the cisgender obsession with urination. I can only imagine that the lawmakers of Canada and the USA are really into wet fetishes with the amount of legal time that gets spent on this issue, when you consider everything else that is going on in the world.

Within transgender culture, there are the haves and have nots; I’m on the edge of transgender culture, as I don’t pass, and it matters to me. I’d need to make a confession regarding my response to the trans restroom trend #occupotty: I’m jealous, ridiculous, depressive, whiny, angry and selfish. I think the transgender restroom selfie idea is great; it will actually influence lawmakers who are ignorant of transgender topics and only see the world as binary male/female. Those that declare genitals and chromosomes as the only sex markers that matter (even though in nature neither genitals or chromosomes are binary) are ignorant. “Let’s not let pesky science get in the way, hoist those pitchforks! Seriously Nigel, hoist the pitchfork higher or you’ll stab Steven. Oh, Nigel.”

But I see these perfectly passing men and women taking selfies in restrooms and I want to yell about how unfair it is. They won’t be hassled in restrooms anyway, because they pass. I don’t think it is likely that a cis man in a restroom is going to approach a guy with a beard and say “Hey, I like your bushy beard and all, but I suspect you are actually female and thus I am compelled to beat you up now for the sake of the patriarchy.” The same goes for perfectly passing trans women. It’s not the small percentage of trans people that pass that have the majority of issues in public spaces.

After all, passing is called “going stealth” for a reason. The US didn’t invent the Stealth Bomber and say “You know what this needs? More cow-bell.” People who can be “stealth” are in a lot less danger as they navigate cis spaces. It’s still dangerous, of course, and getting outed can have life-threatening consequences; but it’s not the same experience as those whom Gandalf stopped from passing. Some people don’t want to pass; others are unable to take HRT and cannot pass; yet more of us take HRT and still won’t pass. At some point we need to address the societal pressure to appear cisgender.

When I read the online suicide notes, or the cries for help of transgender people, they have some commonalities. One of the threads I’ve seen time and time again is the confession regarding the fear of transitioning; the fear of not passing. They are afraid that they won’t be perfect cis men or women; so afraid that they either kill themselves or won’t transition rather than potentially not pass. Cisgender society demands that trans people pass so that we fit in and aren’t different.

Let’s be clear: I support #occupotty, but I’m very conflicted. The vast majority of transgender people do not pass, and that’s just fine. What we need is some representation; we need to be included in the debate. As a trans woman that does not pass, I can cause issues when I go into a women’s restroom. Guess what? I cause issues when I go into the men’s, too, and that’s way more dangerous for me. So what am I supposed to do? Just not pee and wait? That in itself can lead to serious health issues.

What trans people that don’t pass need is more acceptance from cisgender society, and #occupotty is unintentionally reinforcing the notion that you need look cisgender to use a public restroom; it is promoting the idea that you need to pass to use the restroom that matches your gender identity. This is not going to help me, nor is it going to help the vast majority of trans people that don’t pass to feel any safer in a restroom.

“Okay then, so why don’t you post selfies in a restroom if you don’t pass?” Why thanks, internal troll voice, I was just getting to that.

We don’t we see photos of non-passing trans people in campaigns or online because it’s not what cisgender society wants to see, and it opens ourselves up to mockery and potentially physical danger. Neither option appeals to me; I don’t post images of myself online for a reason. If you don’t meet the “acceptable cisgender level of passing,” you can expect very personal abuse. Decades of the media telling us we’re the joke, the medical profession initially labelling us as mentally ill, the police abusing us and the courts allowing men to kill us using the “panic defence” – all of this has made transgender people careful. Those who pass blaze the way for the majority that don’t; we need them, but they are a double-edged sword.

I’d like to end this with a solution that wraps all of this up into a pithy lesson like a ’90s sitcom, but that’s not going to happen. I’m sorry, but an easy solution to this issue just doesn’t exist. Cisgender society needs to be more accepting and understanding. Trans people need to use restrooms. Not everyone fits into the gender binary, or even wants to, and that doesn’t harm anyone – so lets all stop pretending it does.