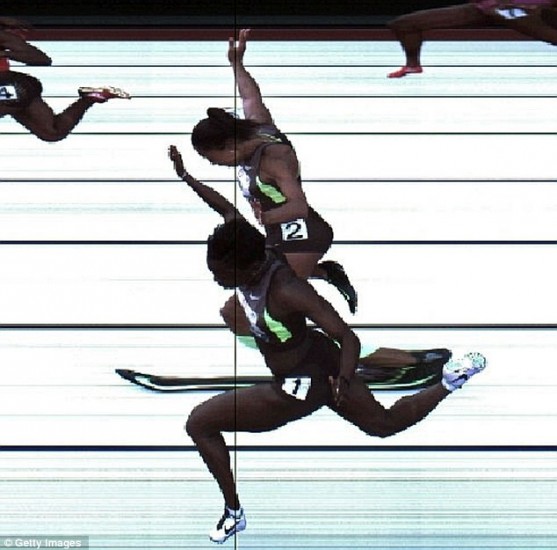 After months of training and a strenuous 100k sprint, all that stands between either Allyson Felix or Jeneba Tarmoh and the United States Olympic sprint team may be a mere coin toss.

During qualifying trials for the upcoming London Olympics, the two runners finished simultaneously, crossing the finish line at 11.068 seconds in third place, a time which would net one of them a place on the US team. In fact, they finished so close together that not even the finish-line cameras, which can capture motion at up to 3,000 frames per second, could help accurately determine the winner.

Facing an unprecedented tie, US track officials spent 24 hours deliberating over how to choose a winner. They announced that both athletes would be given a choice between breaking the tie with a coin toss or a run-off. If both women agreed to a method, that method would be used; if there is a disagreement, they would resort to a run-off.

Initially, Tarmoh was declared to be the winner, and even held the miniature American flag given to Olympic qualifiers at a news conference with the top two finishers. Both women have trained together extensively and share a coach, making the prospect of a run-off particularly emotional.

Ato Boldon, a four-time Olympic sprinter, noted the absurdity of USA Track and Field lacking a procedure for determining close ties in which the finish-line camera has been rendered useless: “How long has this sport been around? It’s crazy that there’s not something very specific. I guarantee that there will be something put in there now. How we reached this point without a rule, I have no idea.”

Both women have yet to comment on the ruling, though their mutual coach, Bobby Kersee, told The Associated Press that they would not make a decision until after they complete the 200, another trial in which both women are entered. Kersee noted that he would have no part in choosing which runner made the team, as that would be akin to asking him ‘Which kid do you love the most?’”

Boldon suggested that a run-off would be a preferable tie-breaker: “It’s like a penalty shootout in soccer: nobody wants it to be that way, but at least it’s still soccer…It’s not the ideal fix, but I think it’s the only fix.”

Although both women are, for the moment, tasking with preparing for their 200 m race, they will soon have to decide whether or not they’ll run for that coveted third spot on the 3 person Olympic 100 m sprint team, or whether they’ll leave their lot to fate.