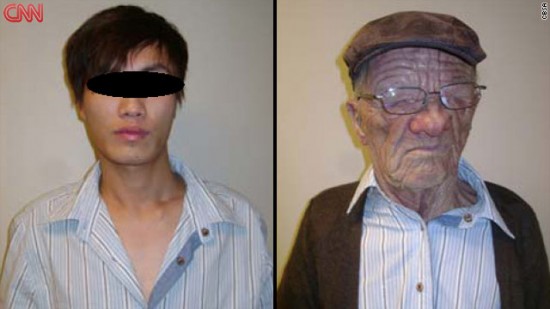 Air Canada Corporate Security released information about a possible impostor on a flight that looked to be an elderly Caucasian male but had “young looking hands.” During the flight, the elderly man went to the bathroom and a young Asian man came out instead.

Border Security Officers escorted the man off the plane after landing in Canada, which was when the man attempted to ask for refugee protection. According to the alert:

The subject initially claimed to be in possession of one bag; however, flight crew approached the BSOs with two additional pieces of luggage which were believed to belong to the subject. One bag contained the subject’s personal clothing items while the second contained a pair of gloves. The third contained a ‘disguise kit’ which consisted of a silicone type head and neck mask of an elderly Caucasian male, a brown leather cap, glasses and a thin brown cardigan.

After the security officers made the Asian man put on the disguise, the man admitted it belonged to him and that he used it to board the flight. Disappointingly, details as to why the man boarded the plane with such an elaborate disguise have not been made public, though it has been disclosed that the man used another person’s boarding pass to gain entrance onto the plane.

This story is crazy for a variety of reasons:

Whatever the man’s reason for disguising himself and hopping on an international flight, airport security should probably get on preventing that.

(CNN via The Next Web. pics via the CBSA.)