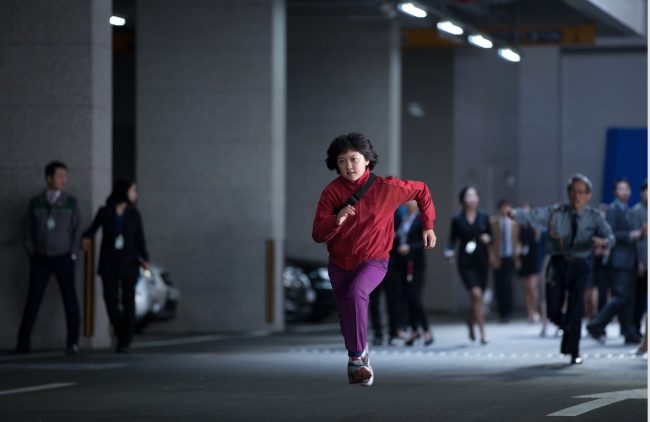 The Bong Joon-Ho film Okja is finally on Netflix, and it’s a thrilling watch about our relationship with animals, translation, and more. At the center of the film is Ahn Seo-Hyun as Mija, a young Korean girl who raises super-pig Okja in the mountains with her grandfather. Their relationship is a sweet one, reminiscent of Totoro but when the Mirando Corporation, led by Lucy Mirando (Tilda Swinton) take Okja away to turn her into food, Mija leaves the mountains and does everything possible to try and bring Okja back.

I sat down with Ahn in New York to talk about her role and the themes of the film with a translator. Her role involved a great deal of physicality, and she’s really the heart of the film in the conflict between Mirando and the Animal Liberation Front (ALF).

The interview has been edited for length and clarity, and includes spoilers for Okja.

On the relationship between Mija and Okja

“The relationship between Okja and Mija isn’t just friends. It wouldn’t be as simple as, ‘she’s a best friend.’ It would be a mother and daughter, more like. Because Mija, when Okja’s getting taken away, she would hang on to the truck, she’d break the glass door at Mirando, or when Okja bites her arm she stops J from hurting her because she has that kind of compassion towards Okja, and she forgives everything and loves her that much. It’s like a motherly love.”

On the movie’s ending

“In this story there’s the world of Mija in the beginning and the “real world.” Her journey is perhaps that she gets sucked into the real world, gets taken away from her own kind of bubble—a mountain with just Okja and her grandpa. And throughout, she kind of gets the taste of what reality is and her own world opens up into what the real world has for her and from that she has experiences in what it’s like to grow up and be part of the real world. So even when she goes back there would be piece of that remaining in her.”

“Overall in the story itself, ALF are the people who help Mija go back to her own world. But in Mija’s perspective, ALF is almost an obstacle because when she tries to take Okja back in Korea, in the underground shopping mall, they take her to another truck and she ends up going to New York to find Okja due to them. In Mija’s perspective, ALF is people who are helpful, but almost a headache. It’s that weird harmony between helper and a person who is stopping her. That unique thing that Director Bong created.”

Similarities between Ahn and Mija

“There’s a lot of similarities, like when they obsess with one thing they absolutely have to go into it, or when somebody goes against their own beliefs and things they have to do something about it. [Ahn] feels like it helped a lot in acting Mija and especially while she was filming, acting as Mija helped her feel like she was now finally the real Seo-Hyun .

She was showing people her true self and as an actress in everyday life you don’t get to express everything you feel and believe in in everyday life, but Mija doesn’t care she just does it, that gave her a sense of relief—here’s a chance to do what my real self wants to do.”

On the use of language in the film

“During filming, and in the film itself, the language barrier and the wall that language usually creates is not necessarily existent. The most prominent part of the language barrier is when K lies to the ALF about what she says in the truck. That’s the point when it’s definitely existent and showing, but later in the film talking to Nancy—she is talking in English. Also when Mija is getting make-up, even if she doesn’t speak it well she kind of understands it. Even when the Korean characters are talking, the feelings get translated. The wall was not as existent as people expected, it’s something interesting in the film.”

“She was not acting with something that was nonexistent because on set there was something called ‘Stuffy,’ that’s in a general shape of Okja and there was a person inside controlling it, whose names was Steve. [Ahn] would say the relationship she made with the person holding the Stuffy and the Stuffy itself would later on translate into what you saw on the screen with Mija and Okja. It was a real connection that happened on set and it’s not something she didn’t have to pretend or act with a fake. It was a different kind of real, but it was real.”

Okja is available on Netflix now.