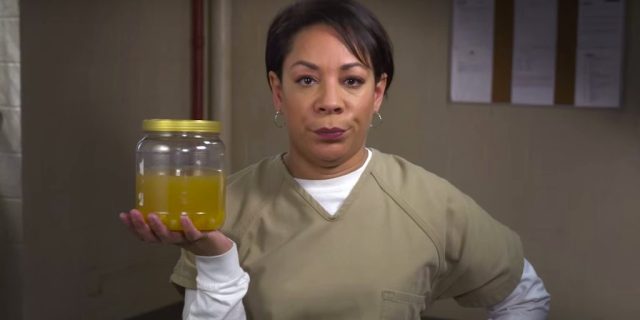 It’s awesome when fellow Netflix shows can show each other love. Especially when they’re two shows as awesomely female-centric as Orange Is the New Black and Unbreakable Kimmy Schmidt. They couldn’t be more different, and yet they each feature women overcoming imprisonment, finding themselves, and becoming stronger with friends than they ever would have alone. Oh, and they also have all sorts of concern about penises in common.

You may remember Kimmy Schmidt‘s Titus Andromedon singing and doing a video for his “ode to black penis,” the fantastically gay dance track “Peeno Noir.” Now, the ladies of Litchfield Prison have done an awesome tribute/parody of “Peeno Noir” called “Honey Jar,” in which they pay tribute to Poussey’s “homemade” prison cocktail. Among other things (like Boo’s screwdriver):

I can’t wait until both of these shows return! Now, when are Daredevil and Jessica Jones gonna sing each other songs?