Who You Gonna Call? The Original Ghostbusters Cast to Yell About Making Us Cry on The Tonight Show 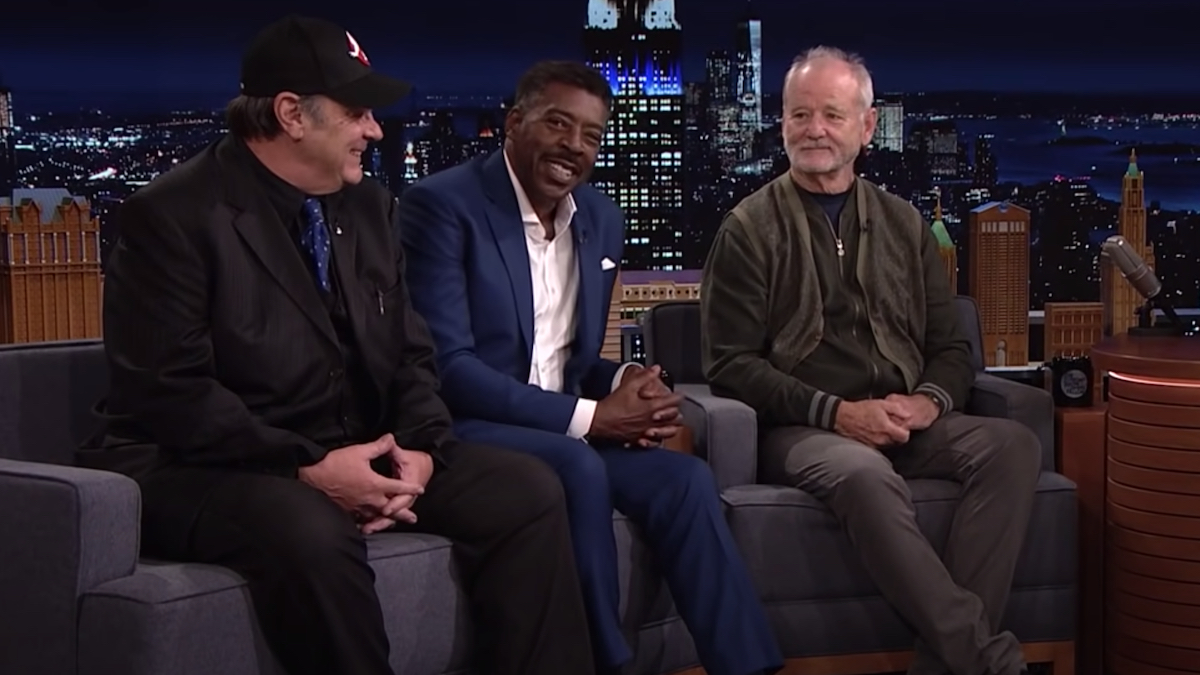 Seeing the original Ghostbusters together doing the talkshow circuit really hits home that Ghostbusters: Afterlife is a movie all about the nostalgia, and honestly, why not?! Going to The Tonight Show Starring Jimmy Fallon and Late Night With Seth Meyers, Bill Murray was joined by Ernie Hudson and Dan Aykroyd as the three hung out in 30 Rock (something that Murray and Aykroyd know very well).

The three promoted the movie and showed footage from filming the original movie with co-star Harold Ramis, showing the extra scenes they filmed in case they couldn’t get the title of Ghostbusters for the movie (since there was a show that existed). But they also told stories of filming, Aykroyd shared his inspiration for the movie, and all made jokes about Ernie Hudson (who is a classically trained actor) hanging out with these comedians.

But why now, right? What made this movie so special that the original Ghostbusters had to come back to be a part of Jason Reitman’s work? “Jason Reitman wrote a great script, so full of heart, going right back to the first two movies and its DNA… We just read it and thought, ‘This is the right time,’” Aykroyd explained to Fallon.

The three went on talk about Reitman, who is the son of original Ghostbusters director Ivan Reitman, and his vision for the movie. “Jason is the son of the original [‘Ghostbusters’] director Ivan Reitman,” Murray continued. “He had his own take because he grew up as a child of the Ghostbusters in a way. He had something he thought would work as a good story and we all agreed that he got it,” he said. But then he also jokingly called both Jason Reitman and his sister Catherine Reitman “pains in the ass.”

On Seth Meyers, the three talked about having people come up to them with tattoos of their faces or iconic characters, and when they asked the audience if anyone had a tattoo, it descended into a bit of madness. To be honest, I guess I would fit their criteria, because I do have a tattoo of Princess Leia on my arm and Carrie Fisher was in The Blues Brothers with Aykroyd.

As someone who loved Egon Spengler as a child and still loves Harold Ramis to this day, this does hurt a bit. Ramis, who wrote the original movie, unfortunately passed away in 2014, but his legacy lives on with his friends and in his work, and he was definitely felt throughout the movie.

Is this emotional? Yes, I’m a comedy kid. I grew up watching these movies. I come from a family that loves Murray and Hudson and Aykroyd and, of course, Ramis. So getting to see them together again, watching as they shared stories and laughed about a movie that means so much to us all? It’s a lot to handle, and yet I love every second of it.

Ghostbusters: Afterlife hits theaters November 19 and was a movie that I genuinely loved every minute of.