Meet the OFF Pocket, a Privacy Accessory That Caters to Your Paranoia

There's probably a very niche market for this thing, but what is Kickstarter for if not niche markets? 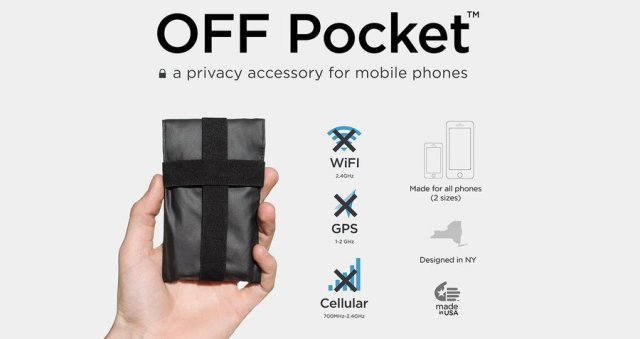 Worried the guv’ment is spying on your phone? (They are!) Well now there’s the OFF Pocket — the cell phone equivalent of wearing an aluminum foil hat to keep people from reading your thoughts. It promises security from spies, and it’s already halfway funded on Kickstarter.

With stories like the NSA going through everyone’s phone records, PRISM, and the whole Edward Snowden situation, people are rightfully concerned about their privacy. It was only a matter of time before some clever entrepreneurs tried to cash in on that (arguably justifiable) paranoia.

The OFF Pocket is essentially a little Faraday cage for your smartphone. When you put your phone inside, all the signals it transmits and receives are blocked rendering it, “Untrackable. Unhackable. Undistractable.”

Adam Harvey and Johanna Bloomfield are the team behind the Off Pocket. They also designed a stealth hoodie you could wear so drones can’t spot you from the sky. Watch them talk about the OFF Pocket in their Kickstarter video.

What I genuinely like about their work is that it manages to walk the line between useful and paranoid overkill. Privacy is a very real concern for a lot of people right now, so ways to protect it are a welcome addition to the tech landscape. Not everyone needs a hoodie to protect them from drones, or a pouch to keep people from tracking their GPS signal, but stories like the Edward Snowden case remind us that some people do.

You can support the project to score things like T-shirts and posters, but if you want an OFF Pocket itself you have to pledge at the $85 dollar level or higher. That seems a little steep, but if you live the kind of secret agent lifestyle  that the OFF Pocket seems to be catered to — or if you just think you do — then it’s probably a small price to pay.