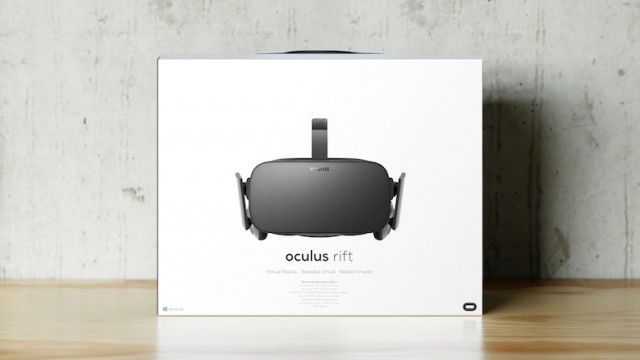 Today marks a big step forward for virtual reality that probably will actually, finally be a real thing that we all use in the relatively near future. The Oculus Rift, the headset that basically sparked the current virtual reality trend with its early attention, is finally here — but it’s got competition on the way from HTC and PlayStation, the latter of which might be entering the PC arena for a more direct face-off.

Though Samsung’s Gear VR is already out, and Google Cardboard has been a smartphone-powered VR option for a while, Rift’s place in history is likely moving the concept out of “nifty sideshow” and into being its own platform. As Oculus explained in a blog post, Rift units are shipping to “more than 20 countries and regions” today, beginning with the ones for those who backed the original project (pre-Facebook takeover) on Kickstarter and then moving on to customers who pre-ordered.

Initial software offerings include over 30 games on the Oculus Store, though developers will also be allowed to release their games on other platforms. They also revealed “a tiny alien world that comes with your Rift” called Farlands, which looks suitably adorable. Still, they’ll face tough competition ahead, as not only does HTC’s impressive Vive hardware arrive in just over a week on April 5, but Sony’s PlayStation VR is coming at the end of the year, and it might not be limited to PlayStation consoles.

Since PlayStation 4 shares a lot of its components with PCs, the possibility is there. At the moment we are focused on games and we are not ready to make any announcements at this stage, but I’d say there will be an expansion into various fields.

Sony’s headset comes in at $399, undercutting the cost of Oculus Rift at $599 and well below the HTC Vive at $799. That price doesn’t include everything needed for the PSVR to function, though, with the PlayStation Camera used for positional tracking being included in a bundle (along with some Move controllers and a game) for $499. Even with those extras, it’s still a friendlier price point, and a move to PC could provide a more budget-conscious VR experience—especially if it works with PCs less powerful than what Rift requires.

It may benefit from a more powerful PS4, though, as a Wall Street Journal report expects the rumored “PlayStation 4.5” to be officially announced before the PlayStation VR release in October. The upgraded PS4 hardware will reportedly feature the ability to output 4k video and accommodate “a richer gaming environment, including a high-end virtual-reality experience.” It’s unlikely that Sony would make the new PS4 necessary to use PlayStation VR, but it may well provide a better experience, and its cost would still total less than other manufacturers’ hardware plus the cost of a high end PC. Whatever happens, the competition should be good for all of us.

(via VentureBeat, image via Oculus)