Ocean’s 8 Review: Doesn’t Live Up to Its Incredible Cast, But It’s Still a Mostly Fun Ride

3 out of 5 diamond necklaces. 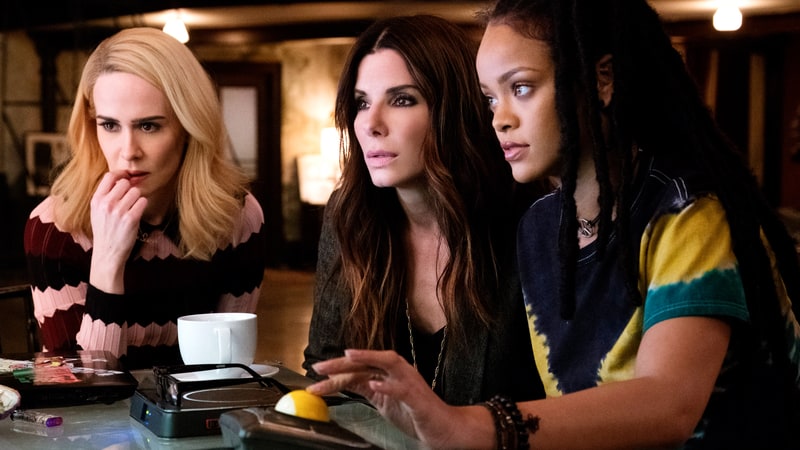 The idea to continue the Ocean’s franchise with an all-star, all-female cast was an inspired one. Not only is it a way to reinvigorate the series with some originality, but it’s a strong response to the current conversation about gender parity in an industry consistently dominated by men. We’re getting tired of seeing women relegated to the periphery of our entertainment, and we’re tired of mediocre sequels. Unfortunately, the bulk of the film is really only a remedy for that first point.

In a very early scene in the film, we see Debbie Ocean (Sandra Bullock), sister to George Clooney’s Danny Ocean, released from prison after a decade and a half behind bars. She declares her commitment to a good and honest life, and then without a second thought—or maybe even a first thought, since conning to her seems to be as natural and essential as breathing—we see her breeze through Bergdorf’s, acquiring a new outfit and fancy makeup through sheer confidence, and set herself up in a room at a luxury hotel on someone else’s dime.

The sequence is fun and full of energy, as she moves through it with total ease, manipulating everything and everyone around her, seemingly without ever seeing her heart rate rise a beat. It’s the perfect start to a conman caper. If only the rest of the movie had held up to that early scene. As it turns out, that sequence may be the high point of the script.

The rest of the film lacks the energy, the pacing, and the sleek style of its franchise predecessors. Instead, it falls solely on the cast to carry the movie through and keep us engaged. Luckily, the cast is up to the job. Like her brother in past films, Debbie puts together a criminal dream team: Cate Blanchett, Sarah Paulson, Rihanna, Awkwafina, Helena Bonham Carter, and Mindy Kaling, who, together, set in motion a plan to rob the ultra-glamorous Met Gala. Or, rather, they will rob a person at the Met Gala, stealing the $150 million antique Cartier diamond necklace off the neck of superstar Daphne Kluger, played to cloying, narcissistic perfection by Anne Hathaway.

That the movie manages to be as fun as it is entirely due to these women. Their chemistry—especially between Bullock and Blanchett—is a joy to watch. But they are let down by their script, which drags throughout. They are never given a clear antagonist to play off of. The film even manages to make the Met Gala—while glamorous—utterly boring. Perhaps the most egregious offense is that, after underusing these spectacular women (save maybe for Hathaway, who, again, got to spend the whole film hamming it up), they brought in James Corden as a third-act investigator, giving him all the energy and quippy dialogue that had been lacking throughout.

For all it’s failings, Ocean’s 8 is still a nice piece of summer fluff. The disappointment is that was merely good, and not great. (There can certainly be no talk of it “ruining the franchise,” and it’s infinitely better than Oceans 12 or 13.) It would have been wonderful if the movie could have lived up to its stellar cast. But as is, these women are more than worth spending two hours with.